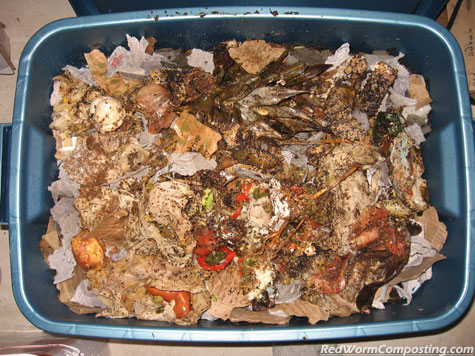 As some of you may know, for the last couple months I have been experimenting with another waste management strategy called ‘bokashi’. I’ve been writing about it over on CompostGuy.com (which unfortunately seems to be experiencing some server issues as I write this).

For those of you unfamiliar, bokashi is a very simple way to deal with common household (organic) wastes. All you need is a bucket (although a specialized bokashi bucket works best), some bokashi mix, and some food waste. You then add your scraps to the bucket and sprinkle some bokashi mix at the same time. When the material reaches the top of the bucket you put on the lid (which should always be on when not adding scraps) and let it sit for a few weeks. The final product can then be dug into your garden or added to your compost bins. The bokashi mix itself is wheat bran impregnated with special microorganisms. You can buy this mix or make it yourself, which can actually be a lot of fun.

Unlike vermicomposting and composting, bokashi is an anaerobic process, but interestingly enough it doesn’t smell bad thanks to the bokashi mix microorganisms. Also unlike regular aerobic composting, you don’t actually end up with a stabilized, humus-rich material. The end materials need to undergo further decomposition in order to become an effective plant fertilizer and soil conditioner. Nevertheless, given the simplicity of the process I think it’s a great option for a lot of people – anyone with a garden or compost bins, that is – I wouldn’t recommend this for apartment dwellers, unless they happened to have a big balcony garden and/or some worm bins.

Part of the reason I was attracted to bokashi (aside from being such a composting fanatic) was because I suspected that the end product would make an excellent ‘worm food’. I commonly recommend that people keep their food scraps in a separate container for a little while so as to allow time for microbial colonization. Well this method does just that, and the final product is absolutely loaded with microbes – and once it is exposed to aerobic conditions it likely becomes an even richer microbial playground.

Two of my bokashi buckets have been brewing for a number of weeks now so I decided it was finally time to try feeding some of this stuff to my worms. As you can see above, I put a decent layer of material at the top of my European Nightcrawler bin. I made sure to add some dry bedding first, just to help separate it from the worms a little should they not feel like moving into it right away. I’ve read that worms go crazy for the stuff, so I’ll be interested to see what happens.

How Much is Enough?