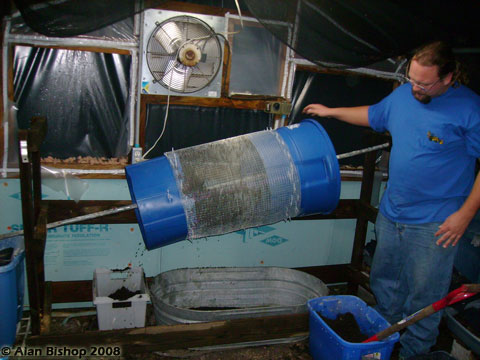 I meant to write about this topic quite some time ago, but it somehow fell by the wayside during the summer. Thankfully a reader email re: worm harvesters reminded me about this overdue post.

For anyone who becomes even semi-serious about vermicomposting it is inevitable that the issue of separating worms from vermicompost will arise. I’ve found that with high enough densities of worms in my tubs I can harvest using the ‘light method’ quite quickly, but this is still far from the ideal method. I have also written about my ‘garbage bag harvesting method‘, which seems to work reasonably well, but isn’t really helpful for actually harvesting worms – it is better suited for transferring all your worms to a new system.

Earlier in the summer I had an enjoyable conversation with one of my worm customers (who came to pick up his order). Like myself this person has a keen interest DIY ‘eco’ projects – like worm bins and aquaponics systems – and is always on the lookout for cheaper ways to make really useful equipment.
At one point the topic of worm/vermicompost harvesting came up, and he told me about an article he had come across outlining how to make your own trommel harvester. Long story short, I asked him to pass along the link when he got home so that I could check it out for myself.

The article in question is called “A Homegrown Worm Harvester” and is found on “Bishop’s Homegrown” blog. I’ve had the pleasure of exchanging a few emails with Alan Bishop, the owner of the site, and I must say he is one of the nicest guys you could ever hope to meet online. His ‘homegrown’ site contains a wealth of fascinating information about his ‘ecologically-managed’ farm located in Indiana – I highly recommend you check it out. Unfortunately it looks as though he hasn’t been adding new posts for a few months, but hopefully he’ll get back to it once the cold weather arrives (and the harvest is finished). Just so you know, Alan also owns a really interesting looking forum called “Homegrown Goodness” – also definitely worth a visit if you are interested in homesteading and related topics.

Ok, back to the topic at hand…

Alan devised his home harvesting system after testing out a smaller version he built based on plans he found online. While certainly functional, he found that it took too long to harvest the quantities of material he had on-hand, so he decided to improve upon the design.

Alan’s new system is really cool, and it apparently also works very effectively. The trommel screen is basically just a plastic garbage bin that has been cut in half and then re-attached via a length of 1/2″ screen (with 1/4″ screen on the outside). To attach the screen to both halves of the garbage bin he simply used plastic cable ties.

I must admit that I became a little muddled trying to get through the rest of the instructions – while I’m certainly a DIY person at heart, that’s not to say I have any talent for building things. Part of the reason I emailed Alan originally was in fact to see if he could help me understand how the unit was actually constructed. He ended up sending me this helpful email:

Sorry about the confusion with my post, I think I was pretty sick when I actually wrote that and looking back, it is pretty hard to follow, I’ll try to elaborate here.

I turn it by hand basically.

Then you build a frame to hold it off of the ground, we re-used some old deck boards we had lying around. The next step is to find a pipe or some other type of metallic rod that you can use to suspend the harvester through the middle of the frame at a 40-45 degree angle.

You will have to bore a hole in middle of the support board on each end of the frame, on the end in which you add worms and compost you want it to be high and on the end in which the unfinished material and worms will fall out you will want it to be lower (40-45 degree angle). You will then have to place a couple of wooden braces in each end of the trash can, cut them to size (to fit the diameter of the trashcan) and then use screws to hold them in place you will then bore two alligned holes through those for the metal rod. Since the trash can is held at an angle you will have to place some type of brace on the back side of one of the wooden braces to keep the trash can from sliding. We used some Koetter pins I believe.

So there you have it! Thanks again to Alan for sharing all this great info. I definitely want to see if I can build one of these myself, and encourage all you DIY worm buffs out there to do the same. Of course, if you DO make one (or some other type of harvester), please let me know!
8)