Like fruit flies (a topic I’ll be revisiting before too long), fungus gnats can represent a seriously annoying pest for home worm composters! Some recent email exchanges with a couple of our readers has inspired me to write about the topic. The above video was actually created by someone who contacted me via YouTube to get my take on these pesky varmints. He seems to have a few interesting techniqes for dealing with them (I’ve never tried attaching fly paper to the underside of the lid – cool idea!). 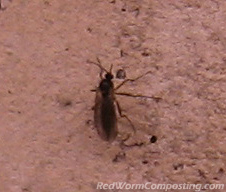 Fungus gnats (eg. Bradysia sp., Sciara sp.) are small, winged insects that are often found in association with the moist, rich soils of household or greenhouse plants. The adults lay their eggs in these substrates and the resulting larva feed on organic matter and the fine roots of young plants (if available). As such, the larva can be serious greenhouse pests, especially when seedlings are being grown. Aside from the damage due to direct consumption of roots, these pests can also transport various root diseases (such as those causing ‘damping off’).

In appearance, fungus gnats look somewhat similar to fruit flies in that they are about the same size, and are also small flying insects (duh!). With a little experience however, you will come to realize that these two pests can easily be distinguished from one another. Fruit flies tend to be lighter in colour (sandy brown or grayish) with red/orange eyes, whereas fungus gnats are typically much darker, and seem have have a more delicate appearance (best way I can think of to describe it – hehe).

The worm bin represents the ultimate fungus gnat haven, given the abundance of organic matter and moist conditions. Generally speaking – and unlike fruit flies – fungus gnats tend to be more of an issue once a worm bin is starting to reach ‘maturity’ (ie. when much of the bedding has been converted to worm castings). In fact, a gnat infestation may be an indication that it’s time to harvest castings and/or start-up a new bin (splitting the contents of the first one).

As with fruit fly infestations, the best strategy against gnats is definitely prevention! Once these insects get established it will be much more difficult to get rid of them. That being said, there is no doubt that many of us will have to deal with them once they have already invaded, so let’s chat about some of the various ways you can deal with a population of them in your worm bins.

Vacuum – Ok, stop your giggling – I’m serious! Using a vacuum cleaner to suck up adult fungus gnats (and fruit flies) can in fact be an effective way to help slow a population explosion. Of course, there will still likely be many many larvae already happily feasting away in your worm bin, so you’ll likely need to continue your vacuum efforts on a daily basis for at least a little while.

Sticky Traps – As shown in the video above, having some sort of sticky trap(s) as part of your gnat fighting arsenal definitely makes sense. Situating these traps in and around your worm bin should help nab quite a few adults.

Coffee Grounds? – One of our readers, Christy, sent me an email inquiring about fungus gnats (specifically, she was wondering how best to deal with them) and mentioned that she might try out a technique suggested by someone else – suppressing them with coffee grounds! I had never heard of this, but encouraged her to give it the ‘ol’ college try’ anyway to see what happens. Well as Christy informed me a short time later, it actually worked quite well! I’ve read that caffeine can be deadly for some organisms (slugs seem to come to mind, but not sure), so perhaps this is the mechanism at work. Aside from wanting to try this out myself in my next gnat-infested worm bin, I think I might want to try leftover coffee as an insect spray in the garden next season to see if it has any effect.

Physical Obstruction – This could be considered closely tied in with the idea of ‘prevention’, since various suppression techniques can offer you a good way to prevent a fungus gnat invasion in the first place. Keeping a thick layer of bedding over top of your composting materials may help to impede emerging adults, as well as those looking for a good place to lay eggs. In one of the videos below (the eHow video), she talks about using a layer of sand over top of your potting soil in house plants. While this might not be the most practical solution for worm bins, it is important to consider where your fungus gnats might have come from in the first place. If you do have houseplants, and like to grow stuff indoors in general, be sure to inspect your growing areas on a regular basis, and try out some of the techniques outlined in the eHow video.

Carnivorous Plants – This is probably more of a novelty method than anything, but you never know – with a few well-placed phytocarnivores in your house you may be able to put a dent in your gnat population (although I suspect this technique will work much better for fruit flies, since they are more likely to get lured by the sweet nectars used as attractant). I would think that Sundews might be the best of the bunch since they are easy to grow and offer multiple ‘sticky traps’ in the form of tentacle laden leaves, but you may have some fun with Pitcher Plants or Venus Flytraps as well. Check out the video below and see how a fungus gnat gets ‘owned’ by a Pitcher Plant.
😆

Biological Control Organisms – There are various biocontrol organisms you can buy to help deal with your fungus gnat infestation. The bacteria, Bacillus thuringiensis (Bt) – used as a biocontrol agent for many insect pests – can be applied as a soil/compost drench to help kill off gnat larvae. ‘Gnatrol’ is an example of a Bt product you can buy for this purpose.

There are predatory mites used the help control the populations of various insect pests. Likely the most widely known is Hypoaspis miles. I actually tried these mites out myself when trying to deal with an insane gnat infestation in a couple of my bins a number of years ago. To be honest, I was a little disappointed with the results. I think my vacuuming had more impact than the mites did.
😆

There are also predatory nematodes (eg. Steinernema sp.) that can be used to fight soft-bodied insect larvae (such as fungus gnat larvae). I’ve never tried them myself, but have read that they can be effective – potentially even more so when combined with other biocontrol agents, such as those mentioned above.

Ok, I think that’s enough reading (on your part) for one post! 😉
As mentioned, I’ve included (below) a couple interesting YouTube videos relating to fungus gnats. Be sure to check them out.

Interesting video from eHow – more geared towards getting rid of gnats in houseplants, but still valuable information for vermicomposters since the source of gnats can often be household potted plants.

She mentions some odd solutions (such as cider vinegar) that sound more in line with fruit fly strategies, but she also offers some interesting strategies I’ve not heard of.

The Power of Worms is MINE!