Getting Over The Hump – The Key to Vermicomposting Success 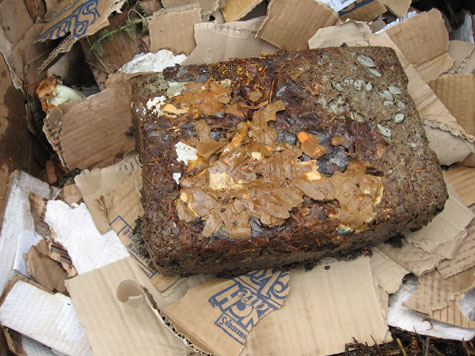 It recently dawned on me just how resilient red worms can be once they are settled in and adapted to certain conditions. I decided to dump the contents of one of my indoor bins into my ‘normal’ backyard composter (ie. not the one I made specifically for outdoor worm composting) to help speed things up and see if I can help reduce a serious fruit fly infestation.

It was a reminder of the fact that I don’t really take much of my own advice when it comes to vermicomposting anymore. 😆

As you can see in the picture above, the contents of my indoor bin are not exactly in an healthy, aerated state. On the contrary, much of the material is an anaerobic sludge (I don’t drill drainage holes in my indoor bins anymore). Yet the uppermost layers (not visible in the picture) are absolutely teeming with healthy, active red worms!

I think the key was providing the worms with a near perfect environment early on, allowing the population to grow on its own to fit the system (not introducing ‘X’ lbs per square feet of bin space right off the bat) and not fiddling with it too much. The rest seems to take care of itself.

I’m sure it also helps that the worms I introduced were healthy and came from a similar mix of materials (cardboard, foodscraps etc).

It’s unfortunate that most of the problems encountered with a home vermicomposting system tend to occur early on, when newcomers most need to be cut a little slack. It’s like an initiation period for vermicomposters. If you make it past the two or three month mark, you are laughing!

Here again are some of the important things to remember when just getting started: