Heating a Small Worm Bin in the Winter 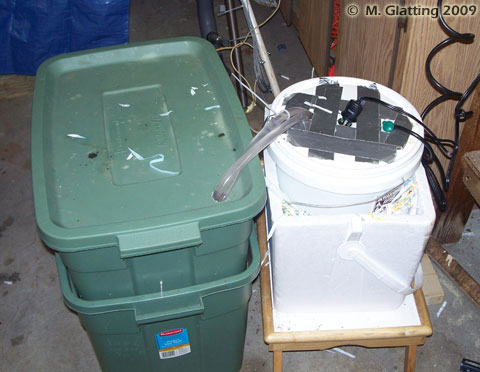 As all my loyal readers will know, I’m very interested in the topic of winter vermicomposting (and winter composting in general) – and it’s something I’ve been doing myself for the last few years. That being said, I’ve always advocated the use of large-scale systems during the winter, since they will generate and hold warmth a LOT more easily than a typical worm bin ever could. Of course, I’ve always been thinking in terms of natural heating – the warmth generated via microbial (aerobic) respiration during the decomposition of organic wastes.

In all honesty, it would be next to impossible to keep a normal-sized worm bin active (or the worms alive, for that matter) if kept outside in temperatures that are consistently below the freezing mark – when relying on natural heating that is!

But who says you have to heat the system naturally??!

Not Mark Glatting – someone who has recently jumped into the wonderful world of vermicomposting. You see, Mark likes to think outside the box – or the bin, I should say!
😉

He’s come up with a really nifty way to keep his worm bin cozy during the long winter months. Mark decided he was going to keep his new worm bin out in his garage this winter – where temperatures have regularly dropped below the freezing mark – and decided to create a simple system to ensure that his bin stayed relatively warm.

MacGyver would have been proud!

Bin warmth is maintained thanks to the circulation of warm water through the system. All that’s needed is a bucket full of water, an aquarium heater, a fountain pump, a thermometer, and some tubing.

Here is Mark’s brief summary of his concept:

My goal here was maintain a sustainable habitat under the harshest conditions that I could not control…the weather. I felt that if I could do that I would be a success. The purpose of this experiment was to see if I could keep the bin from freezing. The bin is in my unheated garage. My materials consisted of a five gallon bucket,an aquarium heater, a fountain pump, 13 feet of 3/8 tubing (not PVC) and a thermometer. The tubing I coiled around the inside of the bin so the cool water would always circulate back into the bucket. I also put a brick in the bucket to displace some of the water so I do not have to cycle 5 gallons of water but four. It is easier to heat 4 gallons than 5. My project worked! The bin did not freeze nor sour after 3 weeks.

…and some additional information:

The heating system itself is very simple. As you said some insulation would help a great deal. I did not take temperature readings inside the bin. I was looking for frost and to see if it would turn sour. The aquarium heater came from Wal-Mart, it is rated at 200 watts and has a thermostat.The fountain pump came from Wal-Mart as well, but I don’t know how many watts it is. One thing I considered was to have the bucket higher than the bin using gravity as a tool to make the pump not work so hard (water flows down hill).
I have a two car garage that has no insulation at all, is not heated and it did get below freezing in the garage a number of times.I probably spent $50.00 US for the whole thing. I am not sure how much electric I used, the system itself can be used in case of an emergency. If we were expecting bitter cold I would fire it up.Remember the heater has a thermostat 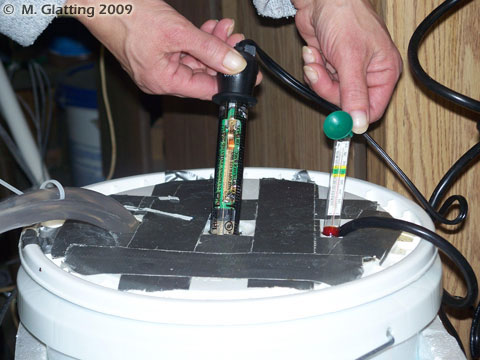 I think Mark’s idea is fantastic, and I was really pleased when he enthusiastically granted me permission to share it with everyone here. A lot of people have asked me whether or not it was possible to keep a small bin active during cold weather, and up until now I’ve just assumed it would be more trouble than it’s worth.

In my mind, Mark’s system changes that. This is something that would be very inexpensive to set up, and – given the low wattage of the heater – almost certainly pretty cheap to maintain. I suggested that one could increase the effectiveness of the system even more if the worm bin sat in a larger box filled with straw, or some other type of insulation material (even scrunched newpaper would probably work well).

Did I mention that Mark is planning to come up with a system to keep his system cool in the summer?
8)
Stay tuned!

[UPDATE]: I received an email from Mark, letting me know that credit for the worm bin warming system should actually go to his wife Letty. My apologies, Letty!

How Many Worms Do I Need?