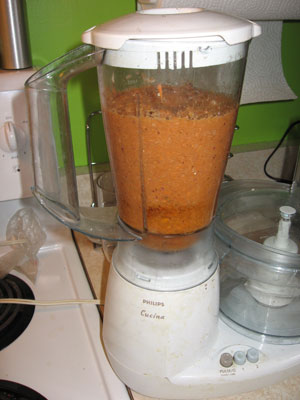 Don’t worry, this post doesn’t have anything to do with pooping in your worm bin.
😉

A little while back I wrote about my (relatively) new ‘Vermicomposting Tray‘ systems – one of the steps I’ve taken in an effort to help increase the efficiency of my operation. One of the interesting topics discussed in the comments section of the worm tray post was that of blending food waste – something I’ve been thinking about quite a bit as of late (again, thinking of different ways to increase the efficiency of my systems).

In all honesty, in the past when I’ve been asked about using food puree as a worm food, I’ve tended to warn people about the potential perils of this practice. I certainly had good intentions – after all, if you aren’t careful with wet food pastes you can end up with a nasty anaerobic mess, and potentially even some dead worms. For the most part, I’ve steered clear of blended food over the years for this very reason.

Now that I’m mostly using open systems, and have a lot more experience under my belt I’ve decided to re-visit the food blending notion. There is considerable evidence (presented in the academic literature) to indicate that foods with smaller particle size can dramatically increase worm growth, and (not surprisingly) greatly speed up processing time as well. That being said, decreased particle size can be a double-edged sword, since small particles also have small spaces between them – meaning less air flow and thus greater chance of anaerobic conditions.

To combat this potential issue I’ve been creating what I like to refer to as ‘homemade manure’ – a similar notion to that suggested by one of our readers in the comments section of the post discussed earlier. Basically the idea is to create the best of both worlds – greatly increased surface area of blended food waste, without the sloppy wet mess typically associated with this approach. The result is something like manure – but potentially even more valuable as a worm food.

My dad gave me his old food processor/blender, which has basically been sitting on his cupboard shelf since it was given to him, probably 15-20 years ago (he loves to cook, but I guess not THAT much!). Unfortunately the food processor component doesn’t seem to be working at all. Definitely a bummer – but the silver lining is that the blender seems to be surprisingly powerful (although nothing remotely close to my ‘ultimate’ system).

So how is this ‘manure’ made?

I’ll admit that I’ve been cheating a little bit by actually adding some aged manure (fairly dry stuff, to help absorb excess moisture) into the mix since I have plenty on-hand. You certainly don’t need to do this. Really, all you need is your wet food paste plus something absorbent (preferably carbon-rich), along with something that will inoculate the mix with microbes. 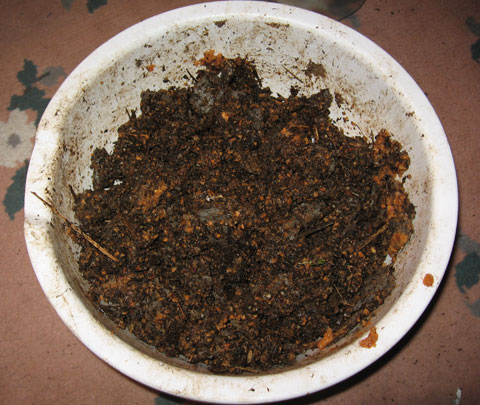 I’ve been using my favourite type of cardboard – ‘egg carton cardboard’ – as the absorbent component. Peat moss, coconut coir, or shredded newspaper would likely all work very well also. In order to inoculate the mix with microbes (assuming you don’t have aged manure) you can use any compost from your bins or backyard composters, or some partially decomposed leaf litter (I think this would be excellent stuff) if you have a forest (or aged leave pile) near by.

I’m realizing that there are endless possibilities for different recipes. I’ve been blending a wide variety of materials – basically anything that ends up in my kitchen scrap holder – without giving it much though, but I do want to start being more selective to see how different mixes perform. As I’ve discovered, blending is a fantastic way to break down and mix in egg shells – not to mention tough fibrous wastes like banana peels.

Thus far I’ve been extremely pleased with the results, to say the least! The worms go crazy for it – more so than actual horse manure I added as a test (although, if I blended and moistened the manure a little more they may have reacted similarly).
The areas where I’ve added the material in the bins are now teeming with worms.

No more waiting months for resistant materials (like carrots, broccoli etc) to get broken down, that’s for sure.
😎

Anyway – as per usual, I will keep you posted on my progress! One thing I’d definitely like to compare is worm growth when fed blended vs non-blended wastes.

When To Add More Bedding and Stop Adding Food