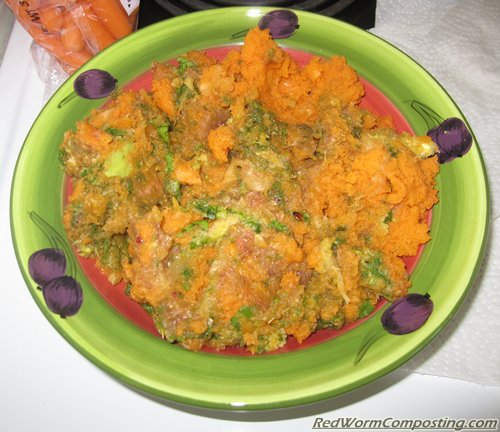 Fruit and vegetable pulp removed from our new juicer

My wife and I recently decided to adopt a healthier lifestyle. We’ve always been pretty health-conscious, but with the new plan we’ll be getting really serious about it. One of the key changes we’ve made initially is to start eating only fruit in the morning, and to eat more ‘whole foods’ in general. As such, my wife thought it would be fun (and helpful) to buy a juicer so we could create lots of nutritious (and tasty) morning drinks.

Not only has the new plan been great for us (and a lot easier than I thought it was going to be), but my worms are certainly benefiting from the greatly increased load of fruit/veggie waste. We produce a giant bowl of fruit peelings and scraps PLUS a smaller bowl of pulp material that is removed from the juicer every day now (and this is not including the usual food scraps we product on a daily basis, which still go into the scrap holder under my sink). I thought initially that a lot of this pulpy stuff would be good to eat still, but after sampling some of it I decided otherwise (and I don’t mind treating the worms well anyway).
😆

Like the ‘homemade manure‘ that I made last fall, juicer pulp can be an excellent food for composting worms since the surface area has been greatly increased (in comparison to the solid fruit/veggies), thus encouraging faster microbial colonization and easier breakdown – in other words, it will offer more food value (to the worms), a lot more quickly than if you simply threw whole (or chunks of) fruit in your bin.

The type of fruits and vegetables being used and the amount being produced (and added to a vermicomposting system) will certainly be an important consideration however. If you are doing mostly citrus, and producing lots of the pulp every day, you probably wouldn’t want to add all of it to your vermicomposting system(s) – especially not if you only have one or two small-to-medium sized ‘worm bin(s)’.

The citrus peelings are also not that great as a worm food, large due to the fact that they contain considerable amounts of potent oils – the odd orange peel here or there is totally fine, but when you are trying to make actual orange juice, you can probably imagine just how much peel you’d be left with. I’ve been adding all the low quality stuff like this to my regular ol’ backyard composter – which interesting enough DOES happen to have a thriving population of Red Worms down below.

One other thing to mention about thick, wet food material of any sort – you definitely won’t want to simply leave it sitting in a mound in your bin. The best way to use it is to add it in a thin layer (preferably buried so it doesn’t attract fruit flies, or to mix with with something bulky and absorbent, such as shredded cardboard.
If left in a concentrated heap, there will be little to no oxygen penetration and it will end up becoming a nasty anaerobic mess. With all those fruit sugars in there, you’ll likely get a lot of fermentation as well.

Anyway – just some things to think about!
8)