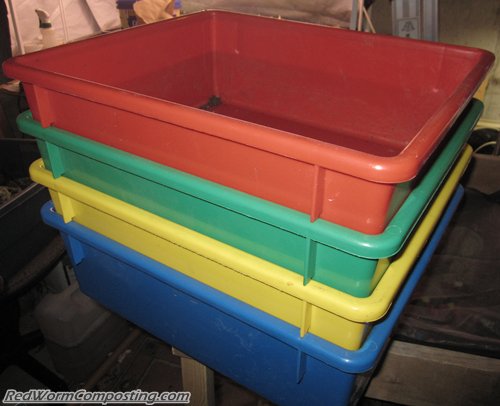 …is a vermicomposters TREASURE??

I am often amazed by some of the stuff people throw out! Quite some time ago, my dad told me about some colorful trays that some local university students had put out for trash pick-up. Having spent enough time learning about (and of course taking part in) my vermicomposting activities/business, he knew instantly that I would put them to good use.

Vermicomposting aside, in all honesty I am REALLY surprised that anyone would throw these things out. They are fully-intact (no cracks etc) and could certainly be used in any number of small-scale storage applications. I won’t complain though, since this is definitely a serious “score” for me!
[You know you are a worm-head WHEN…]
😉

Some might adapt these stacking tubs into some sort of flow-through worm composting system – but I will simply be using them as temporary holding/concentrating containers. I’m sure some of you will remember my “turbo light-harvesting method“. The big trays I use for that are fantastic, but it also helps to have smaller trays to hold (and further concentrate, if need be) those worms that have been harvested.

I have a tiny kitty litter box that has – up until these bins came along – been one of my most useful holding containers, but somehow I don’t foresee it being used all that much any more!

Anyway – I would love to hear from anyone out there who has found really cool “garbage” that has ended being useful in your vermicomposting efforts! Once you are truly hooked, every empty container suddenly becomes a potential worm bin, right?
😆