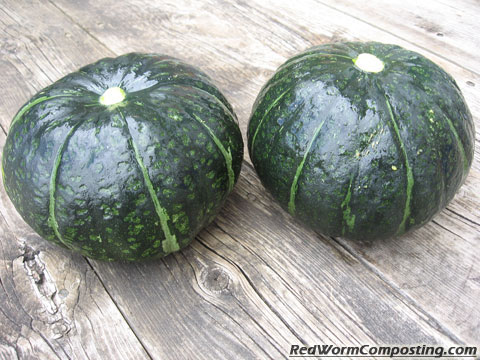 Back in July I was convinced that I had a bunch of watermelon plants popping up in one of my ‘garbage gardens‘. It made total sense to me at the time – after all, I knew I had added a considerable amount of watermelon waste to that bed.

During the weeks that followed I watched as the plant (I pulled up all but one) continued to grow and thrive. Before too long I noticed that one of the flowers was becoming a fruit. I’ve never grown watermelon before, so it was exciting to think that I might have my very own little watermelon patch by the time fall arrived – thanks to the assistance provided by my vermi-herd.

As the fruit developed I noticed that it didn’t really look like a typical watermelon. It had a very dark, rough-looking skin, and it was very round in shape. I just assumed it was exhibiting the traits of a young watermelon fruit…did I mention that I’ve never grown watermelon before?
😆

Anyway, you obviously know where this is going…

Incredibly, it wasn’t until I finally decided to harvest my ‘watermelons’ that I clued in to the fact that something just wasn’t right. Once I had the picked fruit in my hands, I couldn’t help but notice that they bore an uncanny resemblance to an old ‘Buttercup Squash’ I had sitting on my deck – one of two we had purchased earlier in the summer.

Then it suddenly dawned on me…