In my last Worm Inn Journal update I wrote about adding some comfrey leaves to the system in an effort to see if green wastes might offer a viable alternative to food wastes (which I happened to be running low on at the time). As it turns out, the worms seemed to go crazy for chopped up leaves (certainly didn’t hurt that they had been frozen-then-thawed, and mixed with well-aged manure) – so, late last week I decided to really take things up a notch by adding a much larger quantity of plant materials.

That being said, let me once again issue my stern warning for those thinking about doing the same thing…


NOTE: Please keep in mind that green wastes can release ammonia gas (toxic to worms in very small concentrations) and cause other issues like overheating in smaller, enclosed vermicomposting systems (especially plastic bins). They should only be used in very well ventilated systems in which a high quality worm habitat has already been established.

This time around I used a tub full of weeds yanked from my gardens – so a bit more like a “waste” material than the comfrey leaves (which were cut from a live plant). There was a fair amount of dirt and garden debris associated with the weeds so I didn’t bother adding any “living material”, but I did – as per usual – put them in the freezer before use. 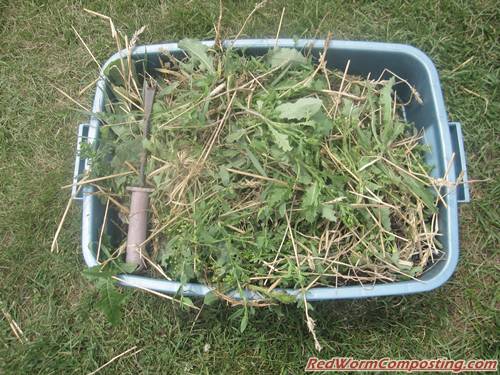 Once my weedy mix was removed from the freezer and allowed to thaw out, I chopped it up. I didn’t check the weight of the material before adding it to the Worm Inn, but I wouldn’t have been surprised if it was at least 4 or 5 lbs. 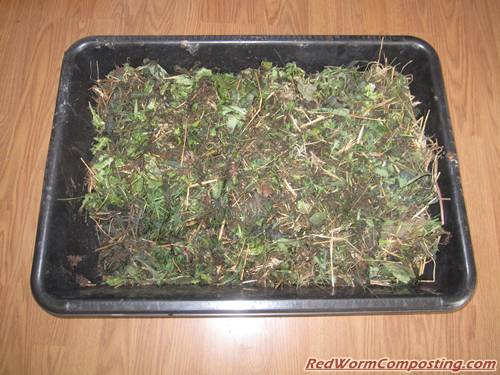 The volume of the mix was quite substantial as well, leaving me with a very full Worm Inn once added! 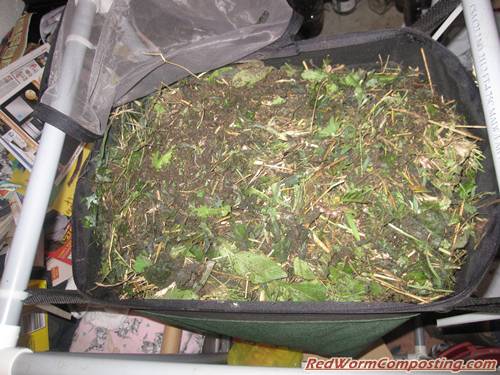 As is often the case with yard wastes, this mix was on the dry side (by vermicomposting standards) so I added some water and put a folded newspaper (i.e. multiple layers of newsprint) over top before zipping up the lid.

I’ll be honest – I really wasn’t sure what to expect. Overfeeding is one thing, but adding that much green waste to a small vermicomposting system all at once is quite another matter altogether. (Again, please don’t EVER do this with an enclosed plastic bin!!) I at least felt comforted knowing that the worms had a good habitat down below, and excellent air circulation above, so it wasn’t likely that they ended up getting gassed out or anything like that.

When I checked on the Inn earlier this week, the weed mix had decomposed quite a bit, and the level of material in the system had dropped down as well. While there weren’t yet worms all through the material, there were loads of springtails, and good concentrations of worms down in the lower reaches. 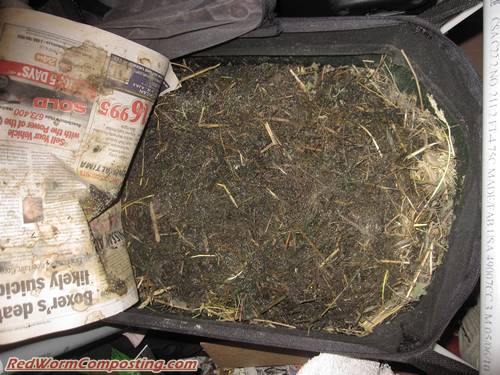 I just checked on the system a few minutes ago and I’m happy to report that the worms are now up close to the surface (and throughout), the level of material has dropped even further, and a lot of it now looks more like compost than rotting plant waste.
This is actually a really pleasant surprise! I honestly didn’t think the weeds would be getting consumed this quickly.

I guess there’s something to be said of optimization of your waste materials and good air flow!
8)

Lasagna Bed With Sod and Manure

A Look at Different Vermicomposts