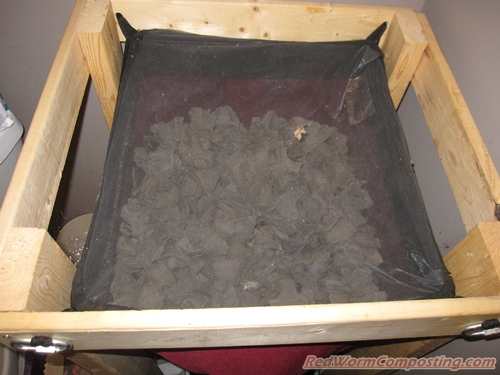 Wow – already 2 weeks since my last update (lots on the go these days)! As I mentioned in an update to that post (written a day later), I added another 7.4 lb of food, plus a thick layer of moistened shredded drink tray cardboard. This left the system “officially” full (cardboard was basically touching the screen lid).

As you can see, the level in the system has dropped a fair bit since that time (even more so than the image seems to indicate). What’s really interesting is that the fruit flies and gnats (aka “flying annoyances”) I talked about last time have all but disappeared. I couldn’t see any up at the screen just before opening it for a closer look.

Digging around in the system I observed loads of worms, very little in the way of recognizable food waste, and conditions that were definitely on the dry side. Unlike last time, I may need to add some supplemental moisture from time to time to keep things humming along nicely. Although, that being said, it IS important to remember that it has basically been 2 weeks since I last added any water-rich food wastes.

I have some wastes thawing out as I type this, so I should be back into feeding mode by tomorrow morning.
😎

On a related note…

RWC regular, and Worm Inn user, John W, posted a really cool video in the Facebook group showing the densities of worms he is getting in his system (where he has been using a similar feeding strategy as myself). Insane! Puts even my previous “optimized” densities to shame!!

If you are not a member of the group yet and want to get involved, simply visit the RWC Facebook group and click “join”. Once approved you can access the video via the direct link posted above.

I added about 5.7 lb of food to the system today (along with the usual “living material” + bedding). I will admit to doing a little bit of “optimizing” this time – in the form of chopping – since the food materials were bulkier than normal (some really big chunks not cut up at all). I also mixed in some bedding materials (not included in weight) because there was a lot of liquid released during the thawing process.

Also…John was nice enough to upload is crazy-worm-density video to YouTube (thanks John!), so I have embedded it here: