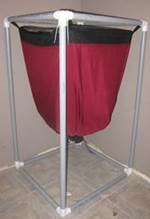 My new Worm Inn Mega system has been up and running for less than a week, but I’ve already been having a blast with it. As touched on in my last ‘Mega’ post, I was initially worried about the stability of the stand – but what’s funny is that it almost seems like it’s getting more stable as more material gets added. Perhaps something to do with the low center of gravity, and the way it hangs off the corner pieces so evenly.

My basic goal for this system is to add ALL of our compostable kitchen scraps, essentially as they are being produced. My usual collection approach involves filling bags that sit under the sink. Once they are full they get frozen or tossed straight into one of my various systems. Now what I’m doing is weighing them (once full), chopping up the scraps with heavy duty scissors, and then adding them to the ‘Mega’.

I have now already added two full bags (1st on Friday, 2nd today) of mixed scraps – the total weight of added material being 3065g (6.76 lb). On Friday I simply added it underneath the upper thatch cover bedding. Today, I added it over top of the thatch and then covered up with shredded newsprint (see second set of pics below). 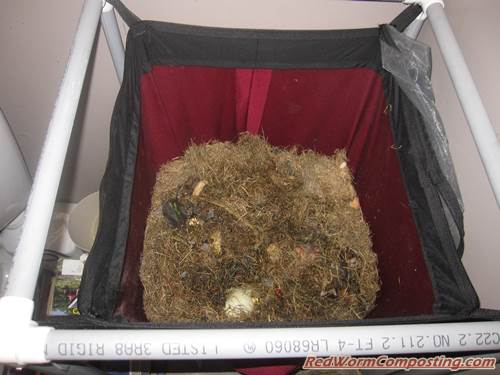 What’s funny so far is that the level of material in the system actually seems to be going down rather than up! I’m sure this is at least partially due to some settling of the materials I added when setting it up. The activity of the worms has likely accelerated this process as well, but based on the relatively modest population (for the size of the system), I don’t imagine they have yet processed all that much of the added food scraps. 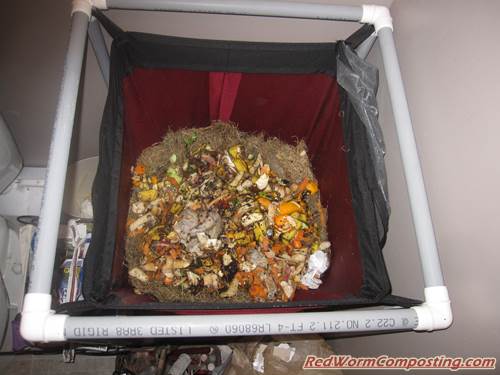 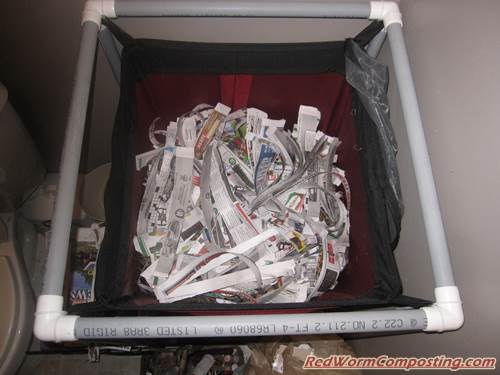 Moving forward, I will more than likely be freezing and thawing the bags of waste prior to chopping up and adding to the system. I’m a big proponent of “optimizing” wastes as much as possible – and I think this is especially important with a smaller population of worms.

One other thing worth mentioning – other than the odd piece of paper towel, coffee filters etc ending up in the scrap bags, I am not weighing any bedding materials. It would give me one more reason to procrastinate (haha) and when it comes down to it, I am mainly interested in the food material processing anyway. Perhaps at some point down the road I can take a closer look at the amount of bedding that can be processed in a system like this (likely a LOT).