The Worm Tea vs Leachate Conundrum 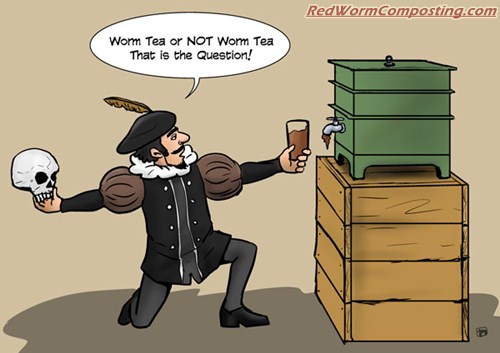 Something that seems to come up over and over and over (and over) again in e-mails I receive is this idea of removing “worm tea” from the bottom of a vermicomposting system. It just so happens that I was having my cartoon guy work on a “Hamlet Tries Vermicomposting” funny for me, so I thought WHAT BETTER TIME to put together a mini podcast on the topic.
8)

Here is the quick and dirty summary:

– The liquid that drains from a vermicomposting system can be called whatever you want to call it – and yes “worm tea” is perfectly fine – but it’s important to realize that this is leachate that has drained down through decomposing organic matter. It’s definitely NOT the same thing as vermicompost/castings tea.

– When a system (whether stacking, single-compartment flow-through, or regular plastic tub with drain holes) DOESN’T produce leachate this shouldn’t be viewed as a bad thing. In my humble opinion this is actually what we should be aiming for! I’d much rather conserve my nutrients and produce a top notch vermicompost than be constantly collecting run-off from my systems.

– Vermicompost/castings tea is created when you submerge high quality vermicompost in water (preferably not straight from the tap) and either let it sit and steep or vigorously aerate it. It is beyond the scope of this post to get into a debate about the merits of aerated vs non-aerated teas, or any other the other numerous issues people seem to have – but if you are looking for more, you may want to check out this post: “Is Compost Tea Just a Fad?” (the fact that there are 78 comments should tell you something! lol).

– Leachate CAN be used as a liquid “fertilizer” of sorts, but the quality will be highly variable – depending to a large extent on how old the system is and how well maintained it is. Liquid coming from mature vermicomposting system that has been well maintained will likely going to be much better quality than a brand new worm bin operated by someone who is not all that familiar with the fundamentals of vermicomposting.

– Because the material the liquid is draining from will be at varying levels of decompostion (and aerobicity), there can be all manner of different compounds (some of them potentially phytotoxic or worm-toxic) being added to the “tea”.

– I recommend diluting any liquid that comes from the bottom of a worm bin – and potentially even aerating it for a period of time before use. I would also recommend only using it in your garden (vs small potted plants) just to be on the safe side.