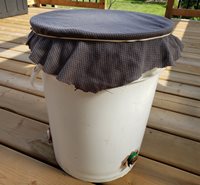 A little over two weeks ago I set up a brand worm bin using a bucket with some handy dandy bottle-top air vents, inspired by Mark Paine’s “vernmenting” systems.

Last week I posted a video showing how the vents were installed, and the system was set-up using worm-rich material from my “comfrey and cardboard” experiment bin.

So far I have been absolutely thrilled with this system! 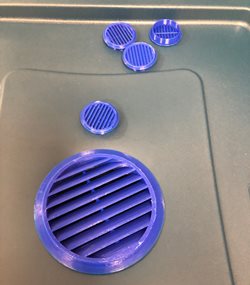 I am constantly amazed and surprised by the technology we have access to these days!

Not too long ago, Becky Carr – a grade 4/5 school teacher at Apohaqui Elementary School in New Brunswick ordered some Red Worms from me (via my Canadian site) to start up a vermicomposting project with her students.

I’m always happy to see teachers starting these sorts of projects in schools, and enjoy providing as much e-mail guidance as needed to make just sure everything gets off on the right foot…but this exchange definitely got extra interesting early on.

In one of her replies, Becky happened to mention that the class had made END_OF_DOCUMENT_TOKEN_TO_BE_REPLACED

Not too long ago I wrote about Mark Paine’s “Vernmenting” method, and mentioned that one of the things that really caught my attention was his ingenious approach for making air vents with plastic bottle tops.

Last week, armed with a few plastic bottles I had managed to round up, I decided to create a new worm bin using a bucket with these vents in it (watch the video above to learn all about that).

As is often the case with DIY projects, my END_OF_DOCUMENT_TOKEN_TO_BE_REPLACED

If you’ve followed me for any length of time, you’ll likely have seen plenty of references to what I call “living material” – but perhaps you haven’t been quite sure what I’m referring to.

I put together the Living Material Guide back in 2015 (hoping to update fairly soon, as I type this in fall of 2019), and I’m happy to report that I now have a (reasonably brief) video lesson on the topic as well!

The basic idea is that living materials are stable, beneficial-microbe-loaded materials – often quite readily available – that can greatly help with the vermicomposting process.

I recently wrote about the rather unique “Vernmenting” concept. As touched on, something that really stood out for me was this idea of “composting rolls” – for use in more of a batch type of system (where everything is added at the start and then basically left alone).

Yesterday, I happened to have a large amount of frozen-then-thawed kitchen waste – that had been sitting for a bit (aka getting a wee bit funky) – in need of a “home” so I figured this would be perfect for testing out my first composting rolls.

I outline everything in the video, but in a nutshell… END_OF_DOCUMENT_TOKEN_TO_BE_REPLACED

If I told you I was going to wrap a dead squirrel in some sheets of newsprint, toss it into a bucket with some dirt and worms, and then seal the thing up…would you expect me to be on my way to successful vermicomposting?

I found myself pondering basically the same question shortly after a friend suggested I look up a concept known as “vernmenting”, and I’d started watching the first video I found.

Right off the bat, I got stuck on the name – why “VERN” not “VERM”? And of course the “menting” ending made me think of fermenting – absolutely NOT something we want to encourage in a vermicomposting system.

I didn’t have the sound turned on, and things just went from bad to ridiculous from there. Not only was the guy END_OF_DOCUMENT_TOKEN_TO_BE_REPLACED