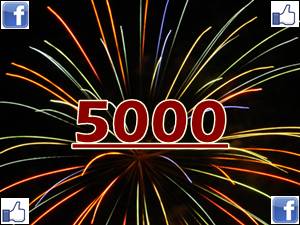 Well, it certainly didn’t take long for us to hit the 5000 Facebook fan mark after I posted my contest update yesterday! I guess the post itself served as a bit of a nudge for those who hadn’t yet “liked” our fanpage!

Whatever the case may be, we now have an official date – April 12th, 2012 – and of course, some official winners as well!

Firstly, I’d like to send a BIG “congratulations” to Chris Brewster, whose Nostradamus-like “April 15th, 2012” prediction effectively blew the competition away! The next closest guess was March 20th, 2012.

Here is the full run-down:

If there was a prize for getting the most guesses close to the actual date, Larry Duke definitely would have won it! Aside from his 3rd place guess of March 15th, he also guessed January 5th, February 14th, and May 12th, 2012! Way to go, Larry!
8)