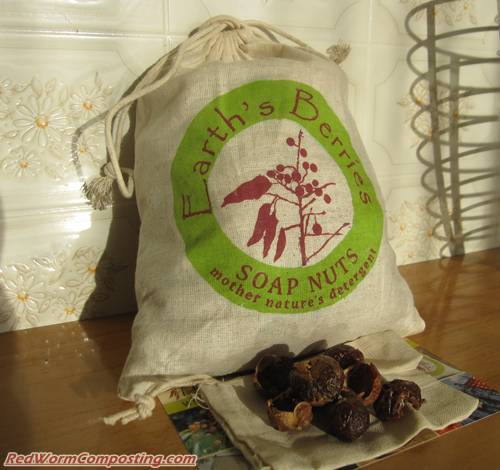 Late last week I received an email from RWC reader, Luci B., asking if it would be safe to add used “soap nuts” to a worm bin (since it is suggested that they be composted when used up). It would have been an interesting question no matter what, but I was especially glad to receive Luci’s email since it served as a reminder of the fact that my wife and I had been meaning to try out these “nuts” (to wash laundry) for quite some time!

We were originally introduced to soap nuts (actually a fruit from the soapberry tree, Sapindus mukorrosi) via a TV program up here in Canada called “Dragon’s Den” (I believe the U.S. counterpart – which even features a couple of the same people – is called “Shark Tank”). The entrepreneurs pitching their soap nut business did a great job, and ended up securing funding from one of the Dragons (Brett Wilson). At the time, my wife and I were thoroughly intrigued with the idea of using this all-natural alternative to laundry detergent, but we ended up basically forgetting about the whole thing. 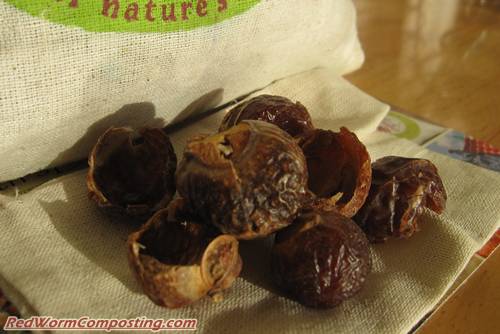 This time around I decided to move a little more quickly (lol), placing an order for a bag of soap nuts a short time after receiving Luci’s email (and her subsequent recommendation for who to buy them from). As you might guess, this is a bit more about testing out the soap nuts for washing our clothes than it is about seeing if they can be processed in a worm bin (after all, even the entire bag of soap nuts won’t add up to much in the way of waste materials) – but I thought it might be a fun RWC project nevertheless!

One of the great things about soap nuts is that they can apparently be re-used a number of times, so a bag of them can end up being equivalent of many bottles of detergent. Of course this also means I’ll likely only end up with small quantities of the spent “nuts” every so often. This probably isn’t such a bad thing, though, since the saponin – the sudsy compound that makes them useful as a washing agent – might not be all that worm-friendly.

Anyway – I’ll likely start putting some soap nuts to use over the next few days (regardless of how well they work – anything that inspires me to do laundry will make my wife happy! LOL), and should have some ready to be added to one of my worm bins by next week.