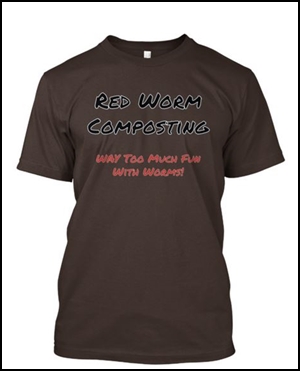 The results are IN!

Here are the TOP 10 favorite slogans:

To see the full break down check out the visual >>HERE<< THIS is exactly why I love surveys! You never can predict what the results might be (well, I have no luck doing so anyway! lol). I was really surprised by these results.

I do like “Official Worm Herder” – I came up with it, after all! lol – but it was more of an afterthought than anything. One I tossed in right at the time of putting together the survey. It just doesn’t strike me as a “winner”, especially not by such a large margin (and it had an even bigger lead early on, believe it or not). But hey – what do I know?! lol

It warms (worms? lol) my heart that so many people voted for the RWC slogan! Again, this was a BIG surprise – especially since almost no one mentioned it during the initial email poll period! Speaking of the RWC slogan…

*** The t-shirt mock-up you see above is NOT an official design. It was just something I quickly put together for illustrative purposes. ***

I am NOT surprised that “Got Worms” was popular – it’s one that multiple people mentioned via email (even though it wasn’t even on my initial suggestion list) – and to me it does seem like one with potential since it is a knock-off on the popular “Got Milk” slogan – with the funny added idea of “having worms”. Which of course brings us to “I’ve Got Worms!” – again, no surprises there! Definitely a humorous conversation-starter!

IMPORTANT NOTES: 1) I should mention that “I ‘Heart’ Worms” has basically been disqualified. As much as I like it – someone reminded me of the fact that New York is pretty protective of their “I ‘Heart’ New York” (with a heart image) trademark, so it’s definitely best to stay well away from that one!

2) I do think the results were affected somewhat by technical difficulties – I saw at least a few mentions of not being able to scroll to the bottom of the list. That said, seeing “Spread the Worm” (which was listed very close to the bottom) with 30 votes, I’m inclined to think that this didn’t have a major impact overall.

The next question on the survey asked how important participants felt it was to include an image on the t-shirts.

Here was the break-down of responses

You can check out the visual >>HERE<< Clearly, most people are leaning towards wanting some sort of image on the t-shirt. BUT, it's also important to note that I received a number of additional comments aptly pointing out that it really depends on the slogan. Obviously, some slogans "need" a visual more than others.

The next question asked how likely participants would be to purchase a t-shirt.

Here are the results:

You can check out the visual >>HERE<< I included this question so I could get an approximate indication of interest. All in all, I wasn't too surprised by the results, although I don’t think I expected quite some many ready-to-buy super-keeners! So that’s cool.

Obviously, it makes sense that most people would want to SEE the design before deciding if they wanted to buy! I’m sure that’s the one I myself would have selected if I had taken the survey.

Lastly, I asked for any additional comments people might have had. This was basically an opportunity for people to elaborate, clarify – and just generally provide more feedback about this t-shirt selling idea.

Responses varied a LOT, as you might imagine, but here are some of the main themes people hit on more than once:

1) “Go for it! Whoohoo” – lots of people left some form of positive comment, essentially voicing their approval of the t-shirt idea. This made me happy.
🙂

2) Design is important – there were a fair number of comments with specific feedback relating to the design, and the need for visual elements etc. At least a couple people used the word “cute”. More than one suggested keeping the design really small (put on pocket etc).

3) Color, Sizing & Quality Are Important – similarly, there were comments relating to the color (eg. “The shirt needs to be any color but white. NO WHITE TEE SHIRT! Color shirts sell better.”), the fit (eg “I’d like a women’s cut shirt…not just the generic, bulky men’s fit.”), and the quality (eg “Get a good quality shirt so it looks good at markets, not limp & sloppy please!”)

Rest assured, I’ve read through the comments multiple times now and have taken them to heart!

OK – time to get down to the nitty gritty details!

Actually messing around with t-shirts myself is NOT a realistic option (especially since I live up in Canada), so I will be using a company called “Teespring“. They have a really cool service that makes it VERY easy to sell t-shirts (and other apparel) online.

It’s almost like a cross between Cafe Press and Kickstarter. You create a “campaign”, specifying the design and the number of shirts you need to sell. Teespring takes care of the rest.

As for the designs – while Teespring DOES provide an interface that helps you to “design” your own T-shirt, in most cases this probably ISN’T the best idea (as my mock-up above indicates – lol!). Especially when some sort of visual element is needed. SO, I’ll need to hire designers.

I will start with Fiverr (you’d be AMAZED by the sorts of things you can get for 5 bucks!), and go from there.

If you are interested in staying in the loop about all this t-shirt stuff, I highly recommend signing up for the RWC T-Shirts E-mail List.

I don’t want to write TOO much about all of this here or in emails to the main RWC Email List.

Additional feedback is more than welcome as well. Please feel free to leave your comments below!
😎