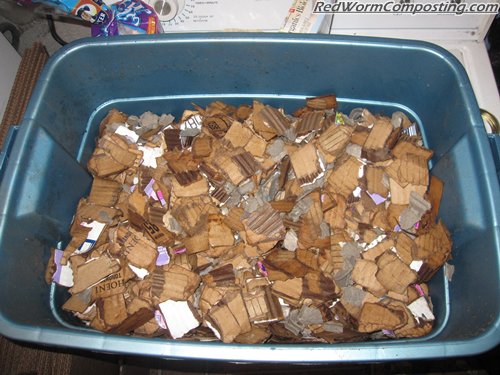 I just wanted to let everyone know that I finally got my ’50 Cocoon Challenge’ (Cardboard Edition) bin set up on Monday. I won’t say it was easy to track down 50 cocoons for this bin, but the important thing is that I DID manage to do so, and we are now off to the races!

Again, the idea here is to ONLY feed this bin moistened cardboard, and to once again see how long it takes for worms to hatch and, more importantly, reach adulthood. The reason I say it’s not quite as important to monitor hatching times, is simply due to the fact that all these cocoons are likely at different stages of development – it would have been next to impossible to round up 50 brand new worm cocoons unfortunately.

I am also really interested to see how the population of worms develops over time with only cardboard as a food source. Speaking of which, I should mention that the “cardboard” in this case refers to shredded corrugated, and “drink tray” (aka “egg carton”) cardboard – my two favorite types.

I basically filled the bin about half way with the cardboard, then moistened really well (making sure to mix everything up nicely) before adding the cocoons.

As promised, I will also be starting up another 50 Cocoon Challenge bin with only moistened straw – so look for a post about that sometime in the next week or so!