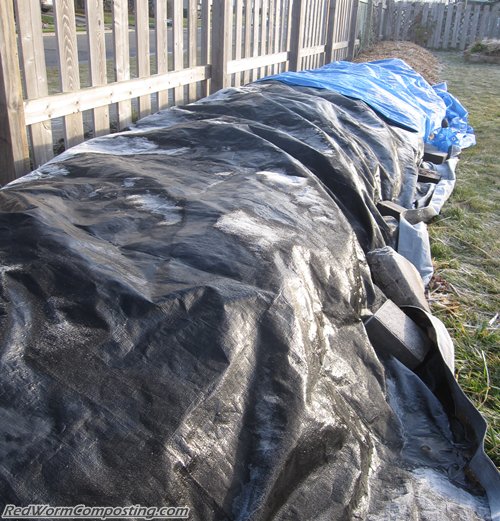 The weather has certainly been getting colder around here as of late, so I thought it would be a good time for an update on my “Winter Worm Composting Windrow” (the testing grounds for this year’s “Winter Composting Extravaganza”). Just to recap (for the benefit of those of you just tuning in) – this is a bed that I set up (with my dad’s help) over top of a stretch of “vermicomposting trench” about two weeks ago. We heaped up lots of fall leaves, mulched grass/leaves, aged horse manure, and pumpkin waste, then covered it with a thick layer of straw (and a tarp over top).

Since writing my last post, I have also added quite a lot of material from my big outdoor wooden worm bin, in an effort to save a lot of worms, and just generally add some more microbial ‘oomph‘ to the windrow. 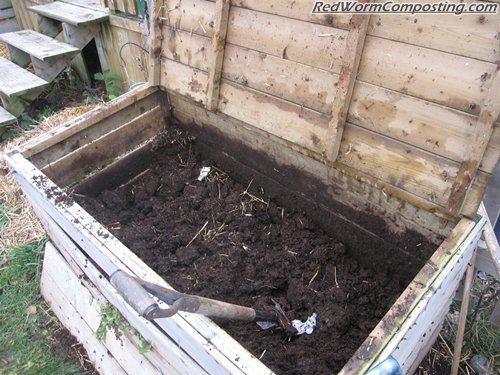 Emptying out the big backyard bin – before the REAL cold hits!

As I discovered, the big bin holds a LOT of material – so I probably only transferred about half (at most) of it to the winter bed. I have been putting the rest of it to good use in other beds (something I’ll write more about soon) – so it’s certainly not going to be left to freeze.

The material was added to the windrow by first pushing back the upper layers of straw and leaves. The idea here is to have this worm- and microbe-rich material sitting in the core of the bed, rather than on top of everything, where it wouldn’t be insulated or serve much purpose in terms of keeping the bed warm. 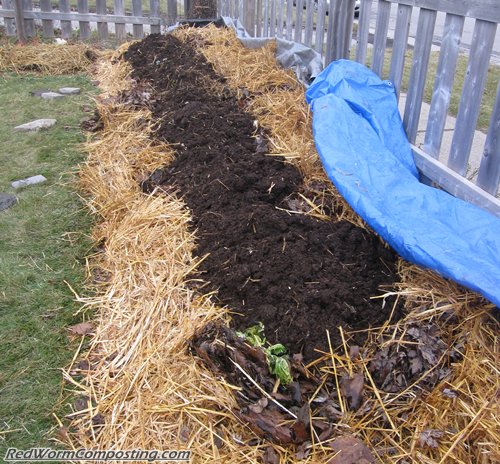 The material was pretty cold by the time I got around to adding it, but I certainly wasn’t too worried about cooling things off in the windrow – in fact, we are still at a stage where it is advantageous to keep the bed heating to a minimum. One of the lessons I learned during my first couple of winter worm composting attempts (you can access the posts I wrote about them >>HERE<<) is that without the proper planning, and resource rationing, you can end up with a really cold composting system later in the winter if you are not careful. So far, things have been moving along beautifully in the windrow. It has warmed up enough to provide great living conditions for the worms (and other critters), but hasn't overheated as far as I can tell. The level of material seems to have gone down somewhat, but upon closer inspection it is clear that there is still plenty of 'fuel' for the really cold times that lie ahead. 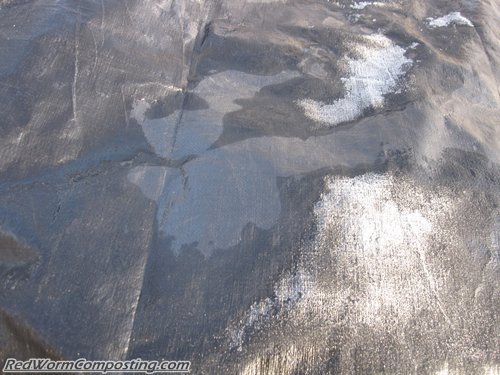 Melted frost, and even dry patches on tarp – an indication of warmth down below 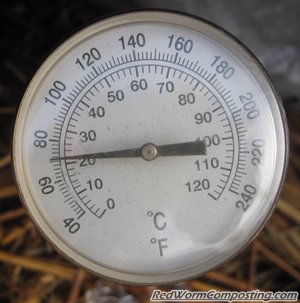 Temperatures in the middle of the windrow seem to be hovering around the 20 C / 68 F mark, with cooler zones along the sides of the bed. The warmest zone I could find in any of the unprotected (but still winterized) beds was probably around 8 C / ~46 F, but temps as low as 2 C / ~36 F were observed as well. It’s amazing what a little extra material and a tarp can do!
8)

As I mentioned in my last post, there is still a LOT more material to be added to this system. My dad and I will be dismantling the big winter bed from last year, and all those straw bales (undoubtedly containing zillions of worms) will be added. The tricky part of course, will be figuring out how to add the materials over time – if I added everything all at once I would end up with a crazy hot composting windrow, and likely a lot of dead worms. I obviously can’t leave the material sitting out in garbage cans in my yard (since any worms living in the straw will likely freeze to death) and there is only so much I can bring inside. What I will likely end up doing is simply adding a bunch of the material to various other beds. Speaking of which, I should mention that I also have plans to convert at least one of my other beds into yet another real winter system (more on that in an upcoming post), so it will certainly come in handy for that.