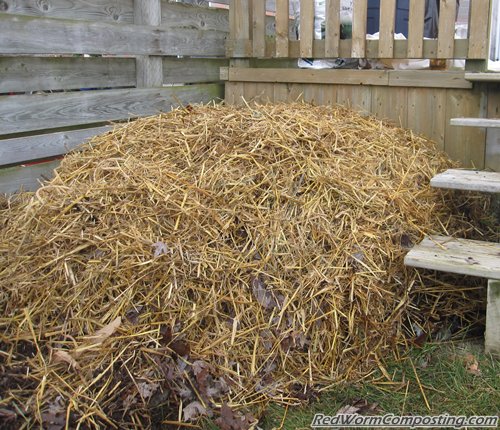 Heaped up with straw, fall leaves and compostable cat litter waste, this worm bed should be relatively easy to keep warm this winter!

Back at the beginning of November I wrote about my fall clean-up efforts, and promised to provide you with an update on my outdoor cat litter composting experiment. As some of you will recall, I filled up one of my backyard composters with compostable cat litter, along with peat moss and other compostable materials, and then basically left it to sit (once the level was nearing the top of the bin). In my last update (WAY back in August) I reported on my pleasant, and unexpected, discovery of a thriving Red Worm population in the bottom of the bin. I had been holding off from actually stocking the system with worms simply because I assumed the habitat in the bin would still be inhospitable for them. Yet another example of how Red Worms NEVER cease to amaze me! (have another prime example of this coming up in another post, by the way!).

Given the fact that this ‘regular’ backyard composter is totally unprotected, I knew that something would need to be done in order to make sure that the resident worm population survived the winter (although, have I mentioned that Red Worms tend to surprise me from time to time? haha! One winter I had a population survive unprotected in this exact same bin). I settled on the idea of spreading out the contents of the bin on one of my (non-food-crop) garden beds, then simply covering it with a layer of straw. Recently, I have decided to take things one step further.

What follows is a series of photos and captions documenting the process. I will also add some final thoughts afterwards, along with links to previous cat litter composting blog posts.

**WARNING** – Some photos show cat turds – viewer discretion is advised (don’t scroll down if this sort of thing bothers you). Also, be aware that cat litter composting warrants some caution, and should generally only be attempted by those with previous composting experience. Any dog or cat waste composting systems should dedicated to those waste materials alone (i.e. don’t toss them in your ‘regular’ compost bins), and should not be set up near any water sources. Cat litter shouldn’t be handled at all by pregnant women or young children.

Ok, you’ve been warned – you may now proceed!
😉 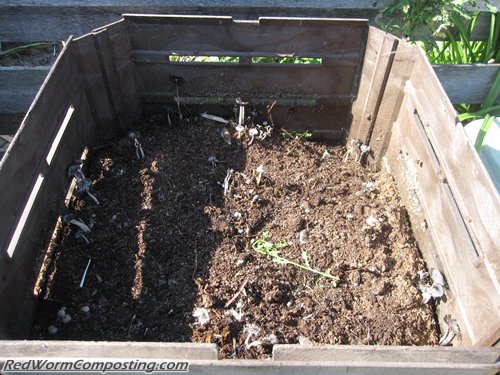 I was surprised by the success of the cat litter composting in one of my backyard bins this past summer (especially given the fact that a substantial population of worms became established without any assistance from me), but definitely didn’t want to let the contents freeze solid over the winter 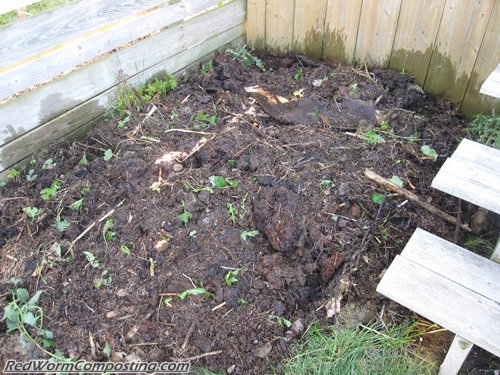 Contents of the cat litter composting bin, spread out on one of my garden beds (one not used for food crops, in case you are curious) then moistened. 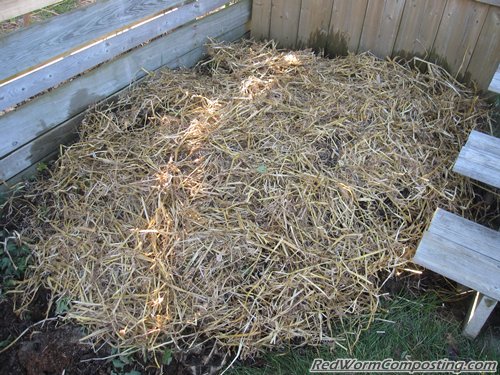 Covered with a first layer of straw – originally planned as my only layer of winter protection. 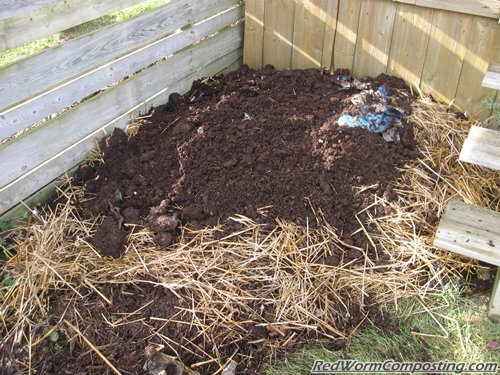 Material from my backyard bin – I figured this bed was as good a spot to add some as any. This is actually what got me to start thinking about upgrading the bed to a full-fledged winter composting system. 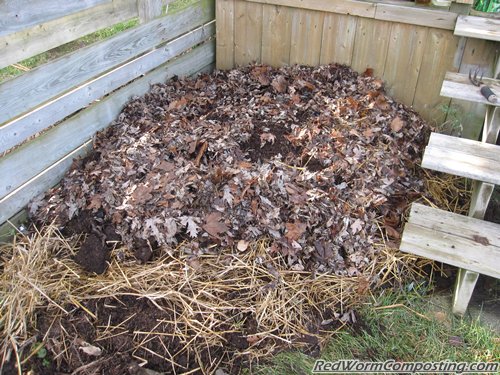 Before adding more compostable cat litter I wanted to make sure there was a bit of a buffer zone, so I added some fall leaves. 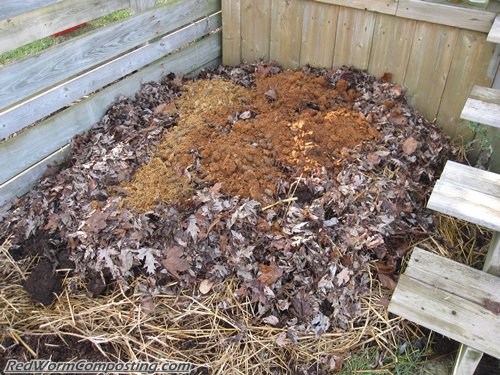 Multiple bags of cat litter waste were then added. 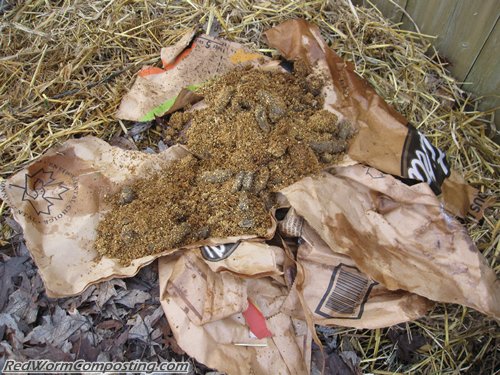 First layer of cat litter was covered with straw, then new litter deposits were added. First I lay down leaves, then brown paper, then the litter waste. 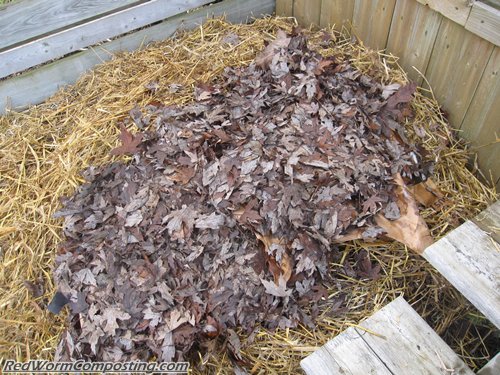 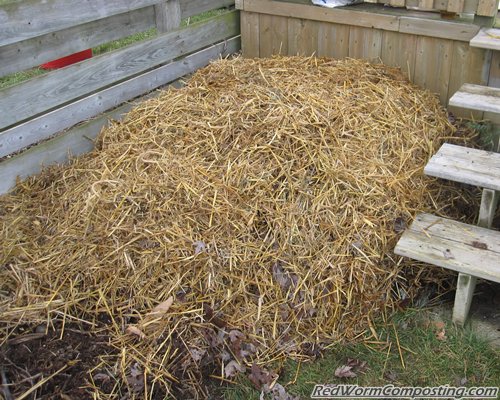 Finally, everything was covered with a thick layer of straw. I will eventually add a couple of tarps, but I want to allow the system to ‘air out’ for a while first.

As alluded to in the last caption, I’ve been somewhat worried about adding tarps over the system too soon – the last thing I want to do is kill off my worms with excess ammonia gas. Most of the litter waste that was added to this bed (apart from the material from the composter, laid down as the first layer) has been sitting in bags, so it certainly hasn’t been given a good opportunity to age and off-gas any ammonia.

What’s really cool is that we ended up getting a huge downpour the evening/night after I set up this bed. This should REALLY help since it will not only moisten everything nicely, but it will also likely help to make the cat litter wastes a little more worm friendly. I am still going to leave the tarps off for now – and for the next few weeks will likely only use them if I know we are going to receive a heavy snowfall.

As far as adding new waste materials goes, I plan to only add a relatively small amount at a time from here on out, and I will make sure to create a bit of a buffer zone (using fall leaves I still have left over) around each deposit. I will also likely add some cat litter waste to the original backyard composter (some excess has already been added there) – since it has been totally cleaned out I won’t need to worry about a new worm population becoming established. It will basically just serve as a holding bin until warmer weather arrives in 3-4 months.

Anyway – it should be really interesting to see how this progresses! One thing is for sure – by the time spring rolls around this bed should be absolutely LOADED with fat Red Worms!