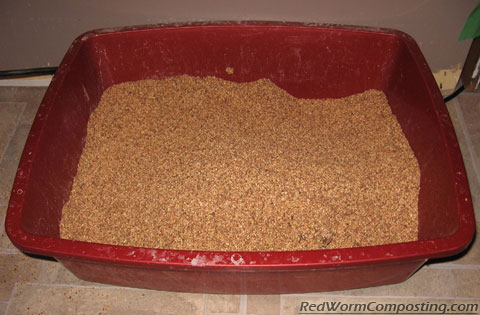 This is yet another blog series that I haven’t been updating as regularly as I had hoped. I’m sure some of you have been wondering how my cat litter vermicomposting experiment has been going. Well, I am happy to report that it is indeed still going. In fact we’re only just getting warmed up here.
8)

I’ve decided to really take my time with the project, not only because of my own time constraints but also for the sake of making sure the system I am using stays relatively balanced (a challenging feat for most new vermicomposting bins). That being said, I have actually upgraded the system to a 55 liter tub (previous was ~ 20 liter container), and have added a lot more material – including a lot more cat poop. I should mention that I’ve decided to not add the urine clumps to this bin given the fact that is a relatively small system with no drainage. Urine contains inorganic salts which can accumulate in the system like this, potentially causing harm to the worms. In a large outdoor system this wouldn’t be nearly as much of an issue (and I’ll definitely be demonstrating this once spring arrives).

While I still haven’t directly added many worms to the system, I have added a lot of spent worm bedding (ie most of the worms were harvested from it) that actually seems to now have a major abundance of smaller worms in it. The worms that were already in the smaller bin seemed to be doing very well (have grown in size etc), so I suspect that I will have a thriving bin in no time.

I will more than likely now leave the new bin to sit for a month or two without adding much of anything to it (other than the occasional sprinkle of water since it is an open system), but will of course provide some updates along the way. Once the worm population is nicely established, I will definitely start adding the cat waste on a more regular basis.

As far as the cat litter itself (PC Green Cat Litter) goes, I really can’t say enough good things about it! Now that I’ve used it for a couple months, I know for a fact that I will never go back to normal litter again. While it may seem like it is a more expensive product, I’m convinced that it actually costs about the same amount, since it lasts longer in the litter box before stinking too much (still have not reached that point) – ie. the point at which you have to dump the entire remainder of the material in the tray.

With my typical litter box cleaning schedule (scooping every couple days or so) the room where the two litter boxes are located never smells excessively of cat litter – and it is a tiny bathroom, so this is no small feat. This was certainly not the case when using the regular litter! Apart from that, the cleaning and tossing aspect of the regular clumping cat litter was vastly more annoying. Not only is it much much heavier stuff, but you have to toss it out with the regular garbage.

All in all, I am so happy that I decided to make the switch!