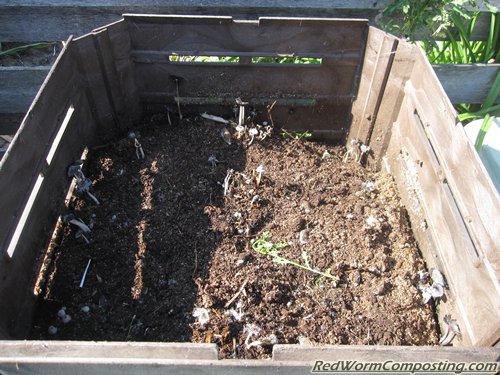 Backyard composter dedicated to cat litter composting, moving along quite nicely with the assistance of fungi and numerous other organisms.

It has been ages since I last wrote about cat litter worm composting, and a couple of recent emails from readers (focused on this topic) reminded me of the fact that it’s something I’ve been wanting to revisit for a while.

As some of you may recall, my original experiment involved setting up a Rubbermaid worm bin specifically for the purpose of determining whether or not Red Worms would consume cat poop. Even though I had started using compostable cat litter at the time, I was worried about the potential issues with salts and ammonia (both very bad for worms), so I decided not to add the clumps to the bin.

The initial results were very promising – it quickly became clear that the worms were more than happy to feed on this waste material. After a while, I basically just left the bin to sit without any further additions however (you know me!!). Every so often I would check on it and add some water (it was an open tub system, so it dried out fairly quickly), but that was about it.

Despite the neglect, a sizable population of (small) Red Worms developed, and basically converted everything (leaves, cardboard, cat poop) into worm castings. I’m happy to report that I finally took pity on them a few weeks ago, and dumped the contents of the bin into various outdoor systems where the worms will undoubtedly find a habitat much more to their liking!

So what about all the cat litter waste?

Obviously, I wasn’t about to start sending it to the landfill again – so I needed to come up with some way to deal with it in a more eco-friendly manner. As such, I designated one of my backyard composters as a cat-litter-only compost bin. Since I was adding everything (clumps, poop and all) this time, and since I had a LOT of it (I’d been bagging it up for several months), I figured there was no point even thinking about trying to add composting worms.

My hope was that over time the older materials would eventually mellow out due to decomposition and I might be able to successfully introduce worms at some point. I left the lid off during some rainy periods, and occasionally watered it with a watering can, hoping this would help to flush out some of the excess salts.

Initially the composting seemed to proceed at a very slow rate, with the volume of material in the bin remaining relatively stable. Strangely enough, after my last big addition of cat litter waste (I tend to let it accumulate for awhile before adding it), the level of material in the bin seemed to go down quite quickly all of a sudden. I also noticed a lot of mushrooms growing in the material (as you can see in the image above) just afterwards.

Yesterday, when I was taking some pictures for this blog posting, just for the fun of it I decided to have a peek at the material in the bottom of the bin. I was curious to see how well decomposed it might be. When I pulled up the compost access door I was shocked to see a bunch of fat, vigorous Red Worms wiggling away. Upon closer examination I discovered that the material was not only loaded with worms, but it’s also contains countless cocoons! 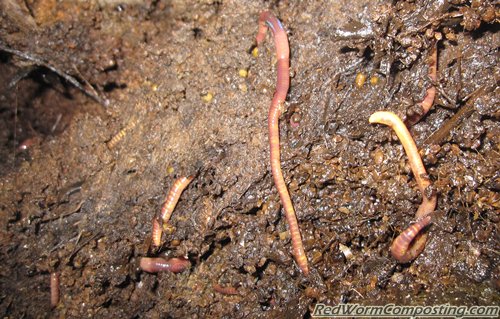 I’ve been pleasantly surprised many times during my years of vermicomposting, but I have to say that this was one of the best discoveries. I thought for sure that this bin was going to be completely inhospitable for quite some time. Finding such an abundance of huge worms down in the bottom already is a good sign that (compostable) cat litter vermicomposting is definitely a viable option!

I’ve read that worms hatching from cocoons into a new habitat will be able to adapt to that environment far more readily than any worms introduced from another habitat (unless of course that other habitat is very similar). This may help to explain the thriving population of worms. The composter was basically empty this spring when I started using it, but I’m sure there were plenty of cocoons that survived the winter (I’ve had Red Worms in this system before).

Anyway – with the worms doing so well in this system now, I’ll certainly be interested to see how well they keep up with (and tolerate) all the new material I add. I also have another new system (in my head) that I’ve been meaning to make and test out – primarily as a nifty pet waste (vermi-)composter.