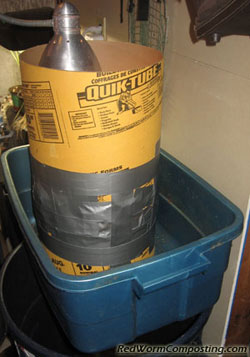 Or SSUBWHT, if you prefer!
😆

Likely the biggest pain in the rear for new vermicomposters – apart from fruit flies and fungus gnats – would be harvesting vermicompost from a mature worm bin.

I have been meaning to create one of these homemade rotating harvesters at some point, but in the meantime, my dad and I have been playing around with various ideas for smaller harvesting systems – those geared more towards to home vermicomposter (and once again using a passive harvesting approach).

We originally thought that some sort of ‘worm traps’ might work well – basically, the worms would be lured into a container or bag of some sort due to appealing food material and/or increased moisture levels. This is an idea I still want to test a little more, but so far we haven’t see any earth-shattering results.

My next ‘Eureka’ moment (haha) came when I started thinking about some sort of 2-compartment box with a screen floor between the two sections. I’ve witnessed worms tendency to head downwards, especially when disturbed and with light shining on them. I figured that if a hot, bright lamp was turned on directly above the material containing the worms (which would be sitting on the screen floor), the worms would dive down into the lower compartment, thus leaving behind most of the worm bin matrix. Thus the idea for the SSUBWHT was born.
🙂

Since the time of the original idea being hatched, I’ve revised the concept a few times, but kept the principles the same. Rather than messing around trying to build some sort of interlocking wooden boxes (I’m not exactly Mr. Fix-it), I thought perhaps that some sort of tube cut into two pieces, with a screen in between, could work just as well or better. I’m leaning towards ‘better’ since the circular shape will likely help to concentrate the light from the lamp.

I originally planned to use some sort of PVC piping, but in the end I opted for a cheaper and more readily available option. I am using a 10″ diameter reinforced cardboard cylinder, intended to be used as a mold for concrete post foundations (for decks, fences etc). 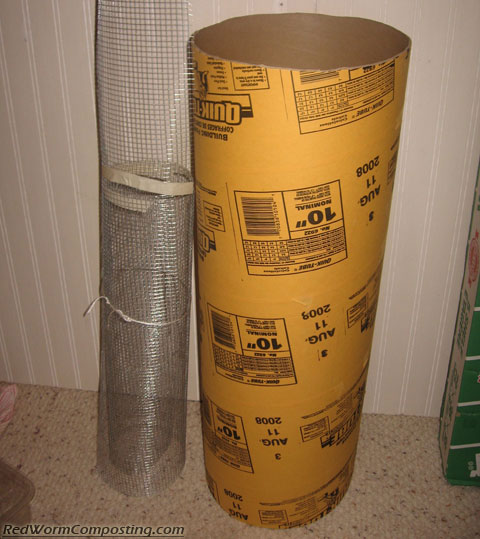 The screen is a fairly heavy guage 1/3″ metal mesh – essentially like a heavy duty chicken wire. It works well because it is strong enough to hold a decent amount of compost, but flexible enough that I was able to create reinforcement tabs that were pressed up against the outer wall of the tube. 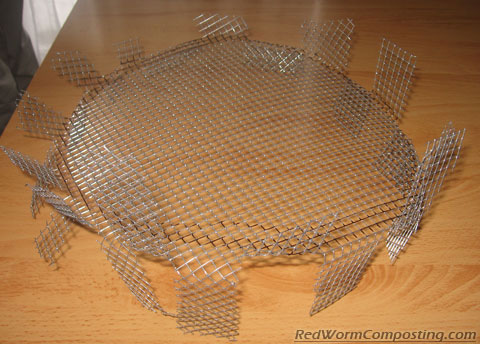 Basically, the harvesting tube consists of two pieces of the cardboard tube, with a screen floor in between. The upper section is about 1 ft in height while the lower section is somewhat less. The supplies for the system cost about $20 (including the price of the duct tape used to secure everything – hehe), and that would be enough for 2 or 3 of these harvesting tubes – so pretty inexpensive! 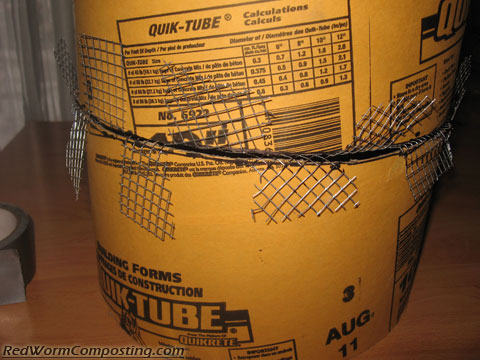 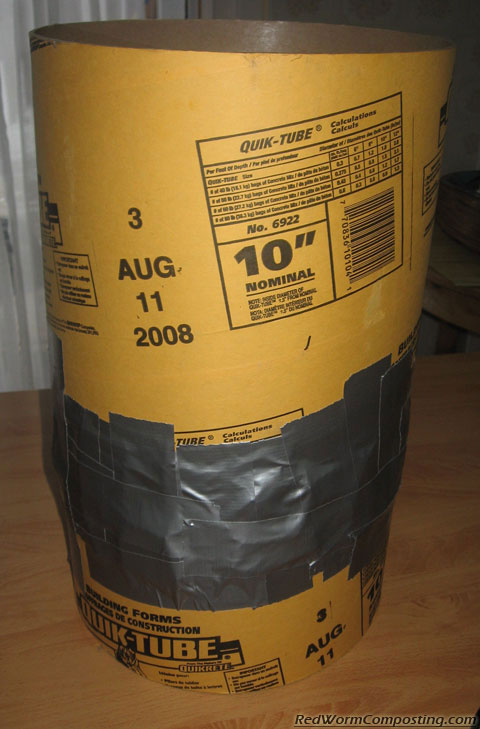 Like any good pseudo handyman, I relied heavily on duct tape to put the system together.

While it WAS incredibly easy to put together this system, when it comes down to it, the big question is whether or not this thing is even going to work for me!

I decided to start testing it out using some bulky material (and worms) from my European Nightcrawler Worm Inn system.

There is a fair amount of vermicompost in the mix, but also a considerable quantity of unprocessed materials as well. Due to the moist, bulky, and generally inconsistent nature of this bedding, it would likely be a real pain to harvest worms from using traditional methods, so I felt that it was a prime opportunity to put the SSUBWHT to the test!
😎 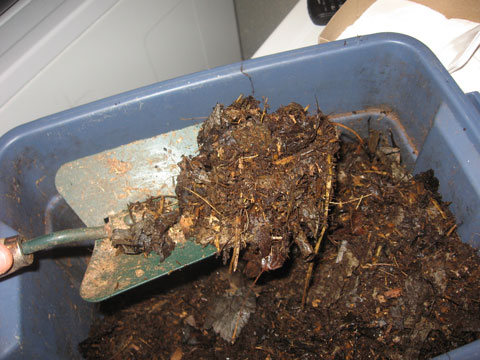 For my initial test I added approx. 3 lbs of bedding/worms (with extra worms included for good measure) over the screen floor, then positioned the lamp head directly inside the tube. While I use mostly fluorescent bulbs around the house, this particular light (occasionally used in my ‘worm room’ for various tasks) actually has a 60 watt incandescent bulb. If you really wanted to drive the worms down quickly, an actual heat lamp might not be a bad idea (although, in that case your tube should be made of something heat resistant). 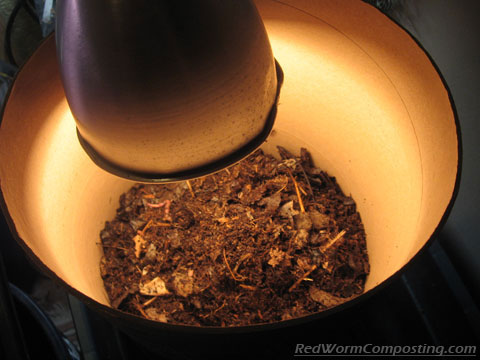 As you can see in the image at the beginning of this post, the tube was positioned in a Rubbermaid tub. The lowermost compartment is simply positioned over top of a heap of moistened brown paper to provide shelter for the worms once they go down.

So how did this puppy perform?!

My initial attempt with the harvester proved to be ineffective, although it would be a great way to collect mites – WOW!
😆

My suspicion is that A) I didn’t leave the light on long enough, and B) there is too much light getting in to the lower compartment (so it’s not a very tempting retreat). This morning I made a plastic skirt for the tube (using a garbage bag) which basically slides down and completely covers the tub. I turned the light on again about an hour and a half ago, so we’ll see if that helps. 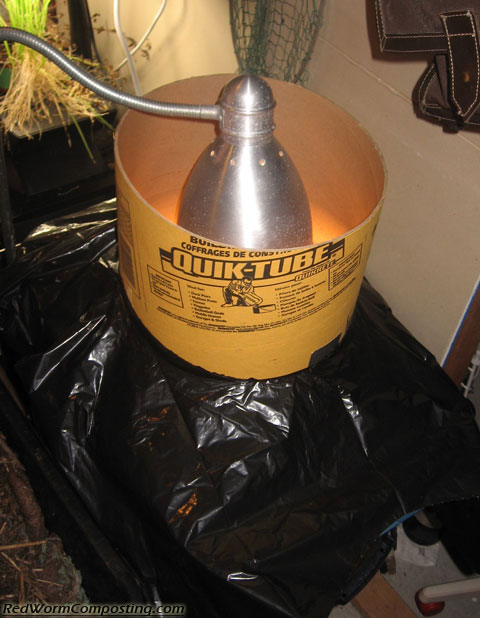 Ok, I’m back!
Well, it looks like I still have more work to do. Again, I’m seeing LOTS of other compost critters down below (mites, springtails etc), and the worms ARE moving downward – but they still aren’t going into the lower compartment.

Just remember, Edison discovered thousands of ways NOT to make the lightbulb before he finally figured it out!
😆