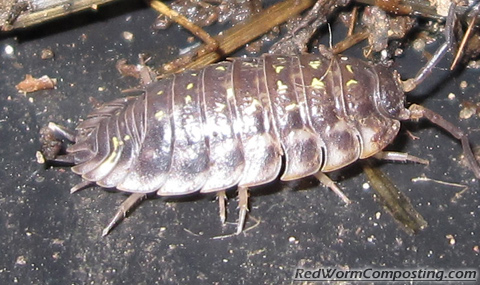 I’ve been meaning to write more on the blog about various worm bin critters. And what better time to finally start doing so than right after receiving my brand new digital camera! Whoohoo!

Before you get too excited with visions of 15 megapixel SLRs with macro lenses and specialized flashes…I should tell you that I’ve opted for yet another handy dandy ‘point-and-shoot’ badboy. It is a Canon Powershot SD880 10 megapixel – nestles in the palm of your hand cutie pie – digital camera.
Sorry – got a little carried away there.
😆

All joking aside, I absolutely love ultra-portable Canon cameras. I’m no photography pro, so I’ve been blown away with the image quality of my previous two models (both very much in the economy class of digital cameras) – and just as importantly – the decent macro capabilities. The new one is a bit more expensive and offers the nice 10 mpx, so I’m hoping I can take even nicer worm pics (I am indeed THAT cool!).

I’ve owned a (non-digital) SLR camera before, and in all honesty it just stressed me out having to pull everything out, fiddle with the dials yada yada. Life goes by fast, so I’d much rather have something quick and easy – even if it means giving up the best image quality.

Anyway…getting back to the topic of this post. I’m sure most of you are at least somewhat familiar with Sow Bugs, even if you don’t have them in your worm composting systems. They are incredibly common in many dark, humid habitats -sometimes in huge abundance. Aside from the ones that look similar to the one pictured above, there are also the “Basketball Bug” (family Armadillidae) Woodlice. The name of course, comes from the fact that when disturbed, this variety rolls up into a ball (similar in appearance to a basketball).

Don’t be fooled by the common names of these arthropods – they are in fact crustaceans, not insects (and certainly not lice!), related then to lobsters, crabs and shrimp. They are not restricted to terrestrial habitats by any means. I’ve found freshwater species that look quite similar to the terrestial one shown above (although somewhat thinner). Apparently, there is even a huge variety (as big as a football I think) that lives in the ocean as well.
Who’da thunk?

Like most of the other creatures in a composting system, these invertebrates should not be viewed with disdain. Not only do they not harm the worms in any way whatsoever, but they actually perform a very beneficial role as ‘shredders’, basically breaking up large fragments of organic matter, thus making them more accessible to microbes for further decomposition. Generally, they prefer a somewhat damp, dark environmental – but not the really moist conditions your worms love. If you notice that the number of sow bugs in your system seems to be increasing, it may be an indication that you are not keeping the moisture content high enough.