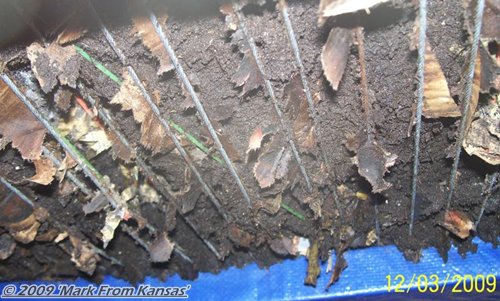 It’s been a while since I submitted an update on my OSCR. A ton of things have happened since I started.

On 11/21/09 I Added 3 pounds of vegetable scraps and 5 pounds of CG and left it uncovered. There have been some major breaches of the newspaper on the harvest chamber cables. What is odd is that about one inch of the finished VC has fallen along with some worms as I expected but, it leaves a 2 inch void in between the cables and the VC.

I suspect that the paper, manure, and leaves have created a layer of bulk that is suspending the VC from falling down into the harvest chamber. I have 6 bins containing moist manure in the harvest chamber to catch the VC, cocoons, and worms.

Tonight the bin has had cold spots – low 60s. The weather outside has been mild and I plugged the heater 3 days ago. I left the food uncovered to try out my gnat/fly experiment, if the temperature doesn’t climb back to at least 66 degrees in the morning; I am going to scrap the experiment and cover with mulched leaves.

My gnat / fly experiment was to attract gnats and flies to see if the horse manure would repel these pests. My other goal was to help Bentley eradicate these insects from the face of the Earth and have them added to the extinct species list.

Honestly, I have never really had gnats in any of my outdoor bins and still only a few showed up but, a lot of people do have problems with them. I got a few gnats hoping I would fit in with gnat issues. A dozen gnats do not mean an infestation. 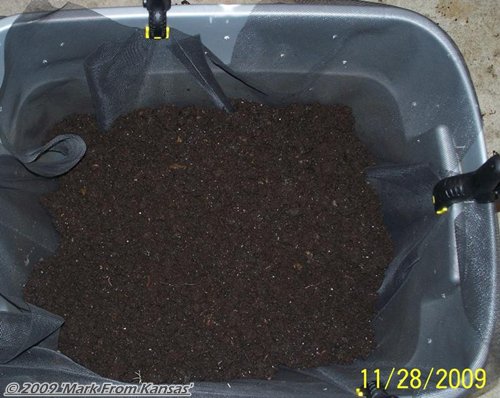 Some vermicompost harvested from the OSCR