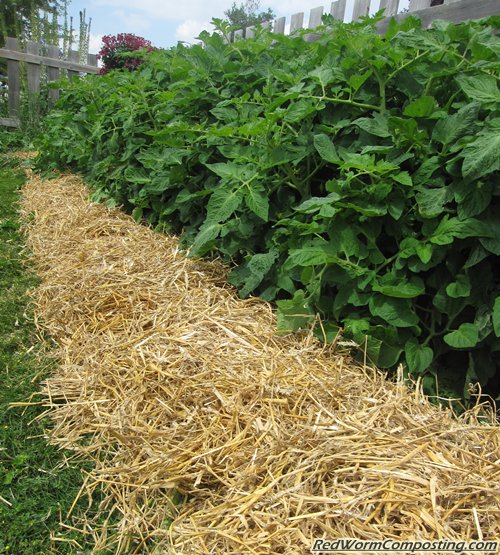 It’s been a little while since I wrote my last trench-related post, so I thought it might be a good time for an overall update. It has definitely been an interesting year on the trench (and gardening-in-general) front – lots of encouraging results, but also some important lessons learned.

Unlike last year, this summer has been exceptionally cool and dreary. August has been much more ‘normal’, which is certainly a relief, but June and July were less-than-ideal for my heat- and sun-loving crop plants.

As you may recall, this year I expanded my vermicomposting trench network, and switched over to bedded horse manure as my main food stock (although I have still been adding my own food waste, and grass clippings). The worms have definitely been thriving in the trenches – happily converting everything into rich worm compost for the benefit of the nearby plants.

I’ve been having a lot of fun with my sandbox trench garden this season. I decided to try growing sweet corn and pole beans, but have also let a few left-over potatoes (last year I grew potatoes and pumpkins) do their thing. 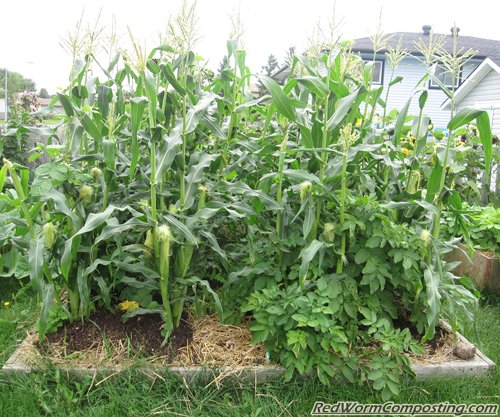 My dad (a retired cultural anthropologist) inspired the bean/corn combo when he explained how/why North American indians used to grow these two crops together. Corn is a nutrient-demanding crop, so the beans (which fix nitrogen in the soil) help out in that department, while the corn stalks act as natural supports for the climbing bean plants 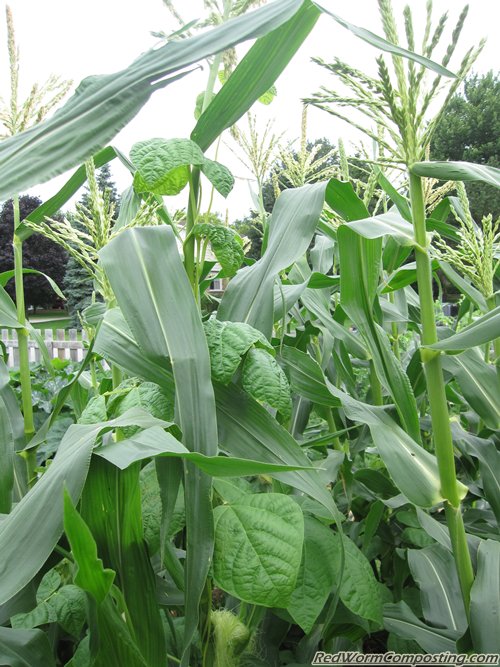 So far, this definitely seems to be a winning combination! Even though I live in corn country, and have been bored to tears by this plant for most of my life, I must say that there is something really cool about having your very own big ol’ corn patch in a suburban backyard. It adds a small (but welcome) element of added privacy in my yard (something that’s been sorely lacking in previous years), while simultaneously giving local pedestrians something interesting to look at. Having a crop of pole beans in the mix is just an added bonus.

This year my ‘pumpkin patch’ simply got moved over to my main trench garden (benefiting from one of my 2009 trench expansions). I love the idea of growing our own Halloween pumpkins (the bigger the better), so I suspect the pumpkin patch will be part of my garden(s) for many years to come.

Thus far, the pumpkin plants have done very well – especially in the past few weeks (with some extra heat, sun and rainfall)! 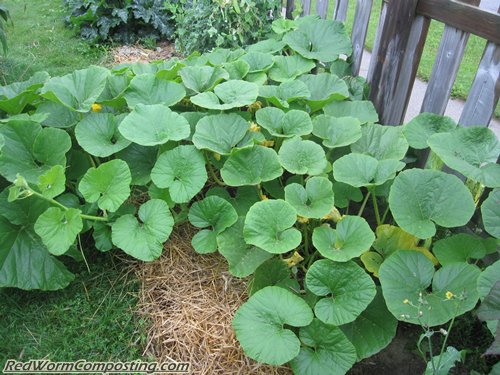 After growing my pumpkins in the sandbox garden last year, I am all too familiar with the tendency of ‘winter squash’ plants to basically take over a rather large patch of backyard real estate. This year my plants seem to be even a little more ‘pushy’ – barging their way right into the corn patch! Trying to reclaim their old stomping grounds perhaps?
😆 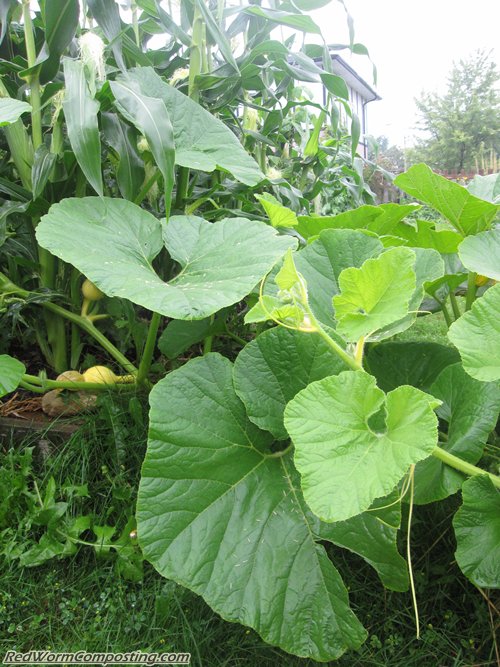 Last year I cut the pumpkin plants back a lot, in an effort to keep things neat, and so I’d still be able to mow the lawn in this part of the yard. This year however, I’ve decided to have more fun with the process, basically leaving the pumpkin plants to roam as much as they please.

My favorite place in the yard now is actually the very back corner of the sandbox garden, where I can basically hide out in the foliage! Behind me is my new sunflower garden, and in front – my corn and pumpkin patches.

As I alluded to above, this year’s gardening efforts haven’t ALL been quite so rewarding! As you can see in my very first image, my tomato plants got off to an excellent start (essentially forming a tomato plant hedge along my fence), albeit a rather slow one due to the cooler temps. The same was true for my zucchini plants – which once again looked like they were straight out of Jurassic Park!
😆 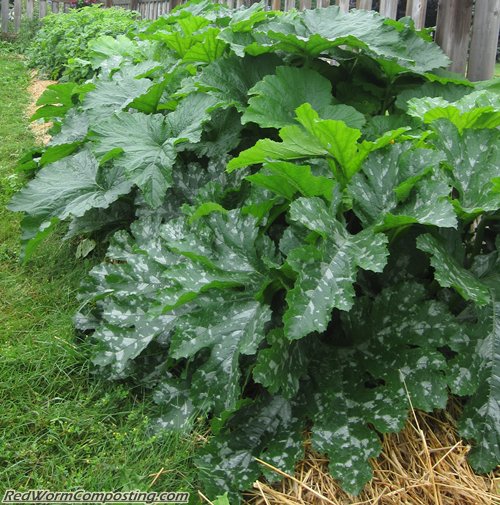 Unfortunately my over-confidence got the better of me, and I learned a very valuable lesson about proper plant spacing! Last year I crammed my plants in pretty tightly, but managed to get away with it – which I’m sure is at least partially due to the fact that we had fantastic gardening weather (hot, sunny, but still with lots of rainfall) last summer.

I think all that success went to my head, and I ended up cramming plants in even more tightly than before. The problem is, when you crowd together a bunch of plants that are all growing really well, you create dense zones of vegetation with greatly reduced air flow. Add cool, damp weather into the mix, and it’s not really too surprising I ended up getting burned.

So what’s the damage?

My zucchinis have still been producing reasonably well (can you imagine how badly off a zucchini plant would have to be in order to not produce any fruit? haha), but the tell-tale signs of plants in distress are very evident – the zucchinis have been growing quite slowly, and quite a few of them have started rotting right on the plant when small. I guess this is what you get when you try to grow four plants where should be at most two!

On the tomato front…

My roma tomatoes have been hit by some sort of serious foliar disease – I suspect it is either ‘Early Blight’ or ‘Septoria Leaf Spot’ based on the appearance, but it’s been a while since my last plant pathology class (haha), so I’m not 100% sure. The growth of these plants has been so dense, and I didn’t even realize I had a problem until my ‘hedge’ started looking a little lopsided (when some of the plants were in really serious trouble). The disease starts on the leaves/stems close to the ground and works its way up – so if you are not attentive, by the time it makes its presence known it will be too late to really do anything about it. 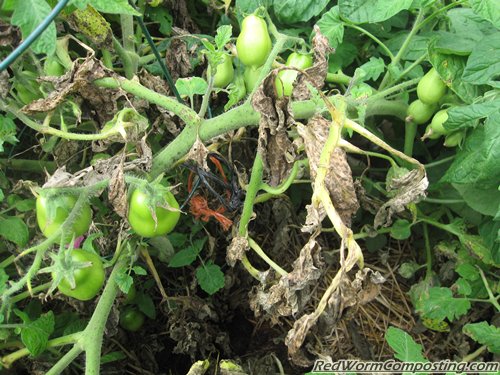 If I had simply planted two or three fewer plants, and paid a bit more attention, I suspect this could have been avoided altogether.

Despite the damage from the disease, I am still hopeful that I’ll be able to get a decent crop of romas. All the plants have quite a few green tomatoes on them, so we shall see. My ‘patio tomatoes’, which are planted next to the romas, seem to be doing perfectly fine, so I’m at least happy about that! I have also let a couple of tomato ‘weed’ plants spring up in other locations without getting yanked, so we’ll see how those do as well.

All in all, despite the extensive damage to may favorite crop plants (tomatoes, that is), I am still very pleased with the results of my ‘vermi-gardening’ efforts this year. I will actually be writing about some other Red Worm gardens I’ve been testing out with great success in the near future.

I’ll be sure to provide a final trench wrap-up post at the end of the season as well.
8)