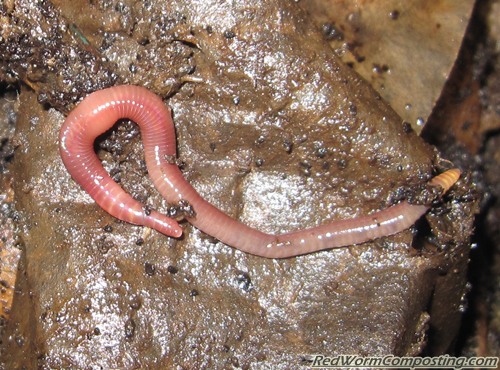 I’m starting to think I must have some sort of internal ’50 cocoon challenge update’ clock inside my brain. For whatever reason, I had the urge to check up on the bin today and write about it here. Checking back on the date of my last post it looks as though exactly two weeks have elapsed yet again.

Well, as you can see I have some good news…but I also have some bad news as well. The good news of course, is that we now have mature worms in the bin. The bad news (also “of course”, given my track record – haha) is that I’m not really sure when the first worm matured.

That being said, I DO know that it was almost certainly somewhere between 5 and 6 weeks from the day I first put the cocoons in the system, since I couldn’t find any mature worms when I quickly looked through the bin last week.

I am really impressed with these results to be totally honest – even if worms had hatched the day after I put cocoons in the bin – which obviously didn’t happen, since I was not able to find any worms until June 25th – that would still be a relatively short period of time. Add to that the fact that the temps in the bin (~ 20C / ~68F) have been below those reported as ‘ideal’ for worm growth (25C / 77F), and this leaves me with the conclusion that Red Worms reach maturity faster than I previously thought.

As mentioned previously, I am planning to do this experiment again using aged manure as food/bedding. I suspect that maturation times may even shorter in that material.

I will of course continue to let this bin develop in the meantime. I’m interested to see how quickly another set of cocoons appears in the system, and how quickly the worm population grows in general.

It seemed like there were a lot more worms in the bin than the last time I looked, but this is obviously due to the fact that they have grown in size. I would still say that most of the worms are immature, but as mentioned in the caption above, there are at least a ‘handful’ (maybe 5-10) of worms showing clitella.