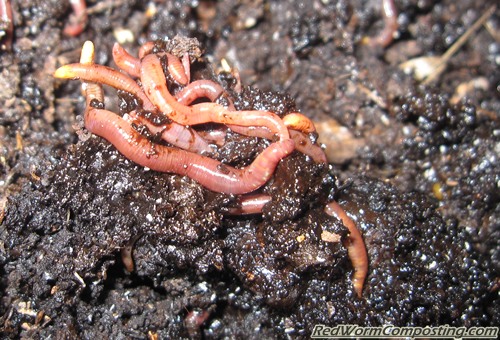 Back in April, I wrote about the giant box of coffee grounds I received from a worm farming friend, and how I subsequently used some of the grounds for my ‘Coffee Grounds Worm Garden‘. As some of you may recall, I was really excited about the material, and quite impressed with the results of some initial testing (namely, feeding it to worms in my large ‘winter worm composting bed’).

Fast forward a month or so, and I was not nearly so impressed with coffee grounds as a vermicomposting ‘food’. My dad and I ended up with serious over-heating issues in the winter bed, and it seemed next to impossible to keep the material nice and moist. In my coffee grounds worm bed, the worms continued to avoid the material for what seemed like weeks. I ended up dumping aged horse manure over top and basically forgot about the whole thing. All my remaining grounds have simply been sitting in (partially open) tub in my backyard ever since.

Fast forward to the present, and I really just don’t know what to think about this material!
😆

I was inspired to write this post after digging around in my coffee grounds garden yesterday and coming upon a zone that was absolutely writhing with Red Worms!

And the material they were in? Drum roll please…

I should explain that we’ve had a LOT of rain in the last few days, and the grounds were nicely saturated with water. When it comes down to it, that – along with at least some aging – seems to be the key to making this material appealing for worms.

Something I’ve observed many times with concentrations of wet coffee grounds simply left to sit outdoors, is that they dry out quite quickly and start to look like they’ve undergone some sort of combustion (see next image). My dad is in fact convinced that this is what is happening (either via hot composting processes, or spontaneous combustion). I disagree, and actually think the material is being rapidly colonized by some sort of mold, which gives it the lighter colored, powdery appearance. 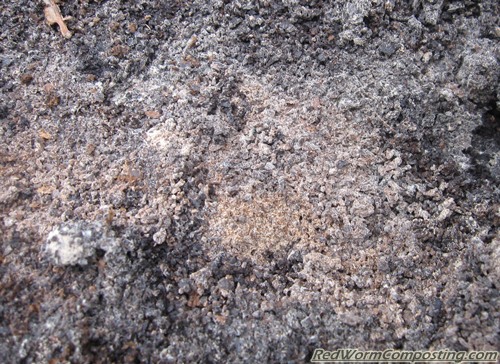 Once dark and moist, these grounds have dried out and taken on an almost burnt appearance

One thing is for sure – I’m definitely looking forward to finally putting the rest of those grounds to the test. Now that they’ve been sitting outside (and in the rain numerous times) for so long, I suspect they will be a lot more appealing to the worms…as long as I can keep them wet!

Something else I should mention – all grounds added to my indoor, enclosed plastic bins seem to stay nice and moist, and the worms have no reservations about moving into the material. Hmmm…

Anyway, I’ll be sure to keep everyone posted on my continuing trials and tribulations with coffee grounds!