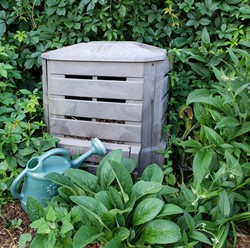 Back in early August I wrote about an outdoor compost bin I’d been adding some iffy materials to (see “Bentley’s ‘Bad Boy’ Bin”) – things like chicken bones (with some meat on them), compostable cat litter, oily/salty salad with cheese etc.

This was a “let’s see what happens” type of experiment, with the goal of demonstrating that you can basically compost any type of organic waste – even with worms involved. It’s all just a matter of HOW.

Hopefully it’s obvious that I would NEVER recommend an approach like this for a smaller, enclosed worm bin – especially something kept indoors. The bin I am using is good sized backyard composter (“Soil Saver”), with excellent ventilation, and there was already a well-established, safe habitat zone for the worms down in the lower half of the bin when I started the experiment.

Since getting the project rolling, I’ve added:

– A lot of cat litter wastes (note: I did switch from a chick starter to more of a general poultry feed – but it’s quite similar)
– Cooked chicken leftovers (bones, fat, some meat)
– plenty of coffee grounds

…among other things (including more typical worm bin deposits)

Here is what the contents looked like as of this morning: 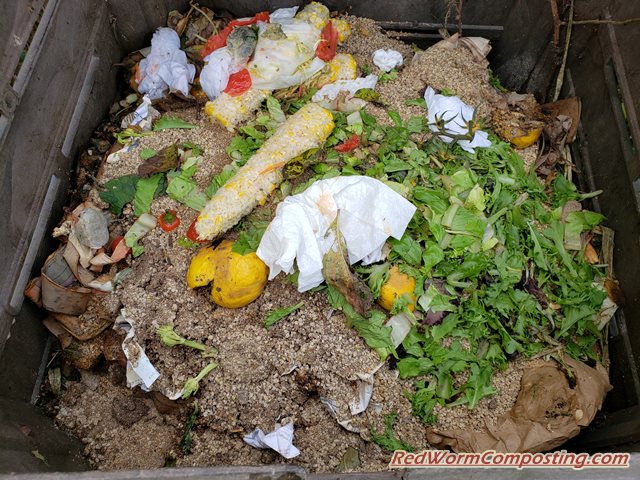 1) There have been some funky odors at times – although I should mention that I’ve also been a bit “lazy” about my bedding and “living material” deposits (as the image above likely illustrates).

2) There have been population explosions of plenty of other critters – all manner of different flies (and of course larvae), mites, beetles etc.

The mites alone are pretty amazing! It doesn’t take long before what looks like poultry feed is actually a seething mass of (tiny) mite biomass.

Here is a close-up of one section of the image I shared above: 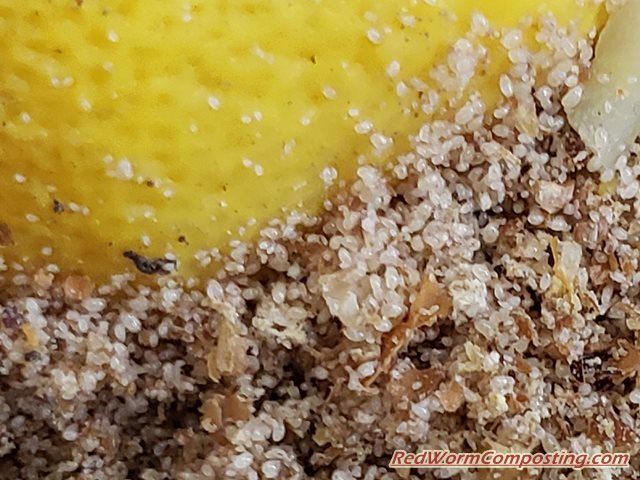 All those little white things that look like salt granules are actually mites.

The BIG surprise for me, however, has been the worms.

Even the original habitat zone in the bin was a far cry from a “worm-rich” zone – digging around it was hard to find any in fact. This is not too surprising since I had mostly been adding bulky yard wastes in the weeks leading up to the start of the project.

I figured that if I did find worms this season, they would likely be mostly down near the bottom. So, I was pretty surprised when I found quite a few directly under the newest deposits while digging around a bit yesterday (and plenty more while digging around today). They do seem to be mostly concentrated near the outer walls of the bin, but I’m sure this is at least partially due to the high temps in the middle zone. 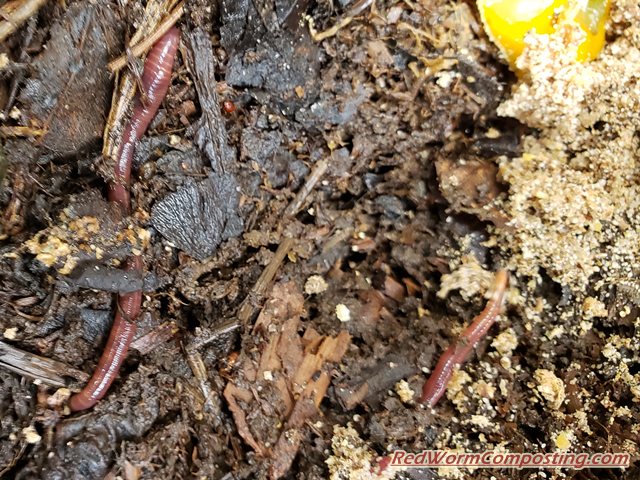 I’ve said it before, I’ll say it again – these worms never cease to amaze me!
😎

Just a friendly reminder that I am NOT suggesting that you should try processing these types of wastes in a typical home worm bin. If you do something like this at all, I strongly suggest using a larger, well-ventilated outdoor bin – and make sure you let the worms move in on their own (starting with an established safe zone down in the bottom is a good strategy). Compost harvested from a system like this is best suited for ornamentals rather than food crops (just to be on the safe side – this is not to suggest it will be infested with pathogens. If left to process for quite a few months, it almost certainly won’t be).

Should be interesting to see how things proceed from here. I will definitely need to start thinking about moving the worms before winter hits. I’ll likely excavate a pit below one of my other backyard composters, transfer everything over and then load the system up with lots of bedding.