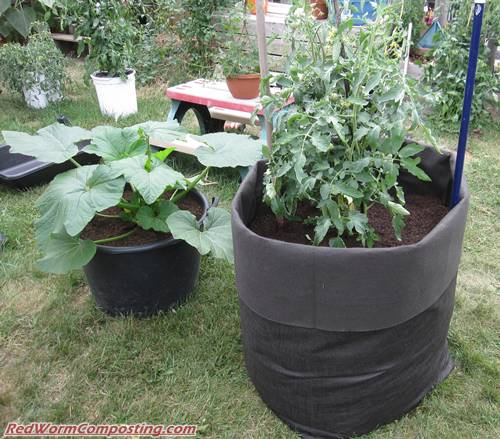 Just a quick Compost Sak update for everyone. The first “sak” I set up (as a composting system) has been doing very well! I’ve added quite a lot of food waste since getting started, and have been blown away by how quickly the waste materials are breaking down. Initially I was starting to think that it was going to be a much better warm/hot composting system than a vermicomposting system (since the contents were heating up quite a bit) – but when I finally did some serious digging down into the lower reaches of the bag yesterday, I couldn’t believe the swarms of small Red Worms I was finding! I can only imagine how well this system will work once temperatures cool off a bit and we get rain on a more regular basis. I really think this could turn out to be a killer worm bed!

The only “negative” so far is the overall look of the “sak” – well, the one I’m using for composting anyway (more on the other one in a minute). It’s not filled all the way so it droops over to one side and doesn’t exactly look as sleek and sharp as my regular backyard composters (which I’m sure plenty of non-composters would actually call “ugly”! haha). Luckily I’m a function over form kinda guy, so I’m very pleased so far!

As you can see in the picture above, I decided to use the other one basically as a giant “Smart Pot”. I’ve had a few tomato plants in small buckets this year – hoping I’d be able to come up with some more spacious digs eventually, so it was nice to be able to rescue this particular plant. I am especially excited about this one since it’s a heirloom variety – called “Great White”- that I’ve read is rather tasty. Yumm!
I really pulled out all the stops for this one when setting up the new “pot”. At the very bottom I put some cardboard and horse manure, then some potting soil, earthy sand, vermicompost and a small bag of organic fertilizer (which basically just looked like vermicompost). Next I put in three bags of composted sheep manure (store bought), some coffee grounds/filters (just for kicks and giggles), and topped up with a very thick layer of vermicompost.

Should be interesting to see how the plant responds. Hopefully I didn’t leave it in the small bucket for too long!

BTW – if you are wondering about the squash plant in the pot sitting next to my new tomato sak, that is actually one of the Crookneck Squash plants from my vermicompost experiment! Amazing what happens when you give them a bit more space to spread out. I suspect it will even get a fair bit bigger than that.
8)