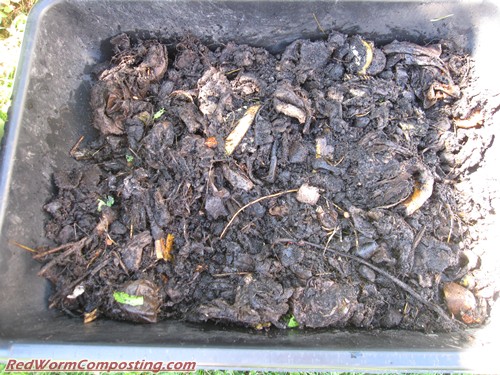 So far I have absolutely been LOVING the new compost tumbler. I’ve only really been using it for a week or so, but the results have been amazing. While I’m certainly not going to claim I’ve created beautiful finished “compost” – I am really impressed with how quickly this system is partially stabilizing the waste materials I’ve been adding. Speaking of which – it’s not as though I added a bunch of stuff a week ago and just left to sit – I’ve continued to add new materials a number of times since then. Other than the stuff I added yesterday evening, it all looks to be nicely broken down.

One little experiment involved adding a rather rancid heap of material you might refer to as poorly prepared “homemade manure” – originally intended for a worm bin experiment, then left to sit once I realized that housefly maggots had invaded. Even the maggots were gone by the time I added it to the tumbler, but the powerful foul smell certainly wasn’t! I wasn’t overly optimistic that it was going to develop an “earthy smell” all that quickly (based on previous experience with foul materials – such as the “bokashi gone bad“), and actually feared that I’d end up offending my neighbors while I waited for it to do so! Needless to say, I was amazed to find that the foul odors were all but gone by the next day! The same certainly can’t be said of stinky materials I’ve added to my worm beds in the past (and vermicomposting is a great way to eliminate foul odors).

Today I decided to start testing some of the material as a “worm food”. 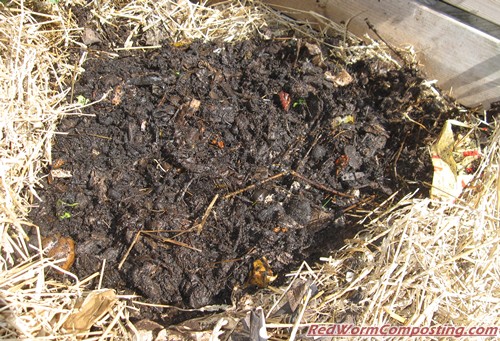 This involved moistening it then simply adding it to one of my worm beds, before burying it under a thick layer of straw! 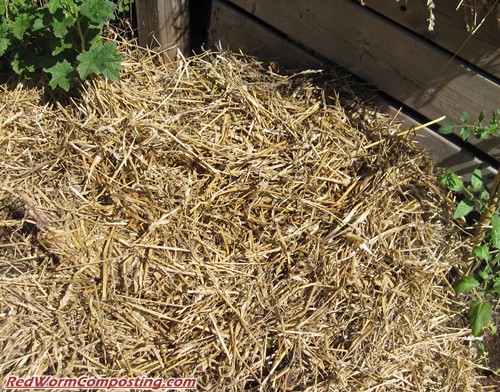 I’ll be very interested to see how quickly the worms move into the “food” zone, and how many show an interest in it!
8)

As mentioned in my last tumbler post, I am getting ready to release a small tumbler info package featuring the plans we followed to create this tumbler, along with my own tumbler building experience. It should be ready for release this week for sure. Will keep everyone posted.