Hope everyone doesn’t get sick of these updates! As you can probably tell, I’m having some fun with these vermicompost experiments!
8)

Ok – the chia growing experiment (above) has kinda run its course, so you probably won’t hear anymore about that. Had I set it up differently – namely, if I have put a small number of seeds in each pot – I likely would have continued to be interested in the results. As it stands, there isn’t anything more to be learned from it.

Clearly, the seeds had much better germination in the Pro-Mix (only) treatment – and clearly the treatment with the rock dust and coffee grounds mixed in with the vermicompost has led to stunted growth. There’s not a whole lot to say about the vermicompost & Pro-Mix treatment. Sure the plants look big and healthy, but there aren’t nearly as many as in the Pro-Mix alone, so that is almost certainly having an impact (obviously overcrowded plants aren’t going to grow as well as those with a bit more space).

About the marigold experiment…
😆

Uhhh…guess I should have made sure they were all the same variety, eh??
DOH!!!! 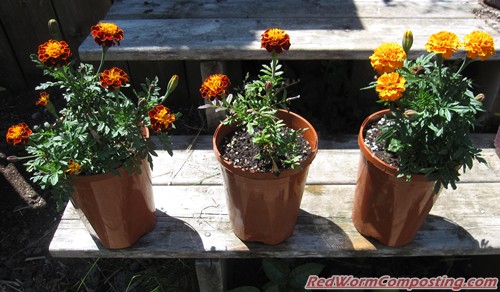 I am still impressed though. The vermicompost and Pro-Mix treatment seems to have really boosted the growth – aside from a bushier appearance, it seems to be encouraging more blooming as well!

Again – no brainer – the mix with the rock dust and coffee grounds is impeding growth. Will need to look more closely to determine which of those two components (if not both) is causing the problems.

Ok – on to the radish experiment…

I should mention that the vermicompost I am using for this experiment is different than used in the previous experiments – as is the rock dust and grounds mix (there is a lower percentage of these components this time around). I’m interested to see if this makes a difference.

Based on germination rates and early growth, the treatments seem to be performing in a similar fashion (just so you know – in the picture above, going from left to right, it’s V/C + Pro, V/C & other + Pro, and Pro-only). Most of the seeds germinated, all treatments seem to have SOME stunted plants, and leaf size seems to be similar (perhaps a bit bigger in Pro-Mix only).

I am really interested to see how this one turns out in the long run though!

OK – one last experiment for the road… 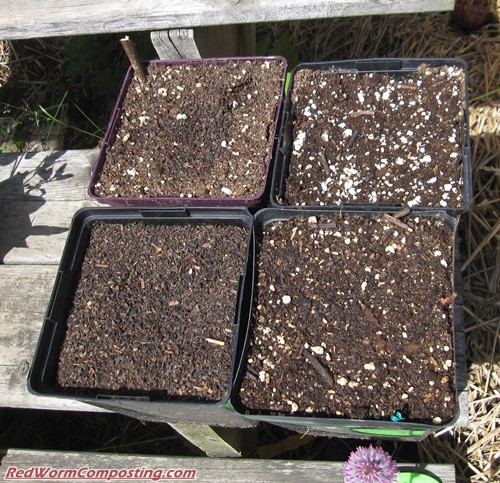 Only one sample per treatment, but again just a preliminary look to see if anything stands out right off the bat!