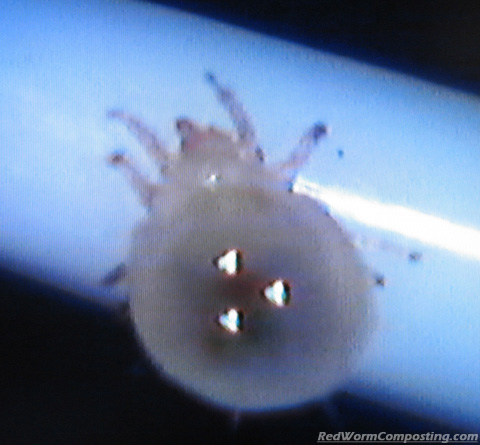 A little while ago I came across a really interesting webpage demonstrating the magnifying power of a kids toy called the Eyeclops. Needless to say, I was impressed – and I’m sure none of you will be surprised to learn that a variety of potential worm bin applications immediately came to mind.
😀

I decided to order one right away so I could test it out!

It arrived earlier this week, and I’ve been playing with it quite a bit already. I must admit that it takes some time to get it working the way you want it to – especially when you are trying to capture living creatures (inanimate objects are a piece of cake) – but I’m getting better at it.

Basically you just plug the Eyeclops into your TV using standard RCA cable, then turn it on and start pointing at stuff and the image will appear on the TV screen. If you check out the page I mentioned (and linked to) above you can see a variety of cool objects and materials magnified at 200x.

The picture above was achieved by putting a worm bin mite (one of the round, white ones I’ve talked about before) on the end of a plastic toothpick and positioning it above the lense of Eyeclops (easier said than done). Thankfully there is plastic base you can sit the Eyeclops in to help steady it – this also freed up one of my hands so I was able to take pictures. As you can see, the image is a tad fuzzy (although – keep in mind it is a picture of a TV screen) – but not too shabby for a kids toy, thats for sure. And I’ve only just gotten started with it!
8)

What I will likely do next time is capture an actual video so you can see the specimen moving around and get a better look at it. Hopefully whatever is being filmed will cooperate somewhat.

To give you some idea of the magnifying power of 200x, I tried to focus on some worm cocoons but they just ended up taking up most of the screen and thus were not very interesting to look at. I WOULD love to capture a baby worm coming out of a cocoon though – maybe if I’m lucky!

Anyway, you can definitely expect to see more documentation of my Eyeclops testing in coming weeks and months. Should be fun!