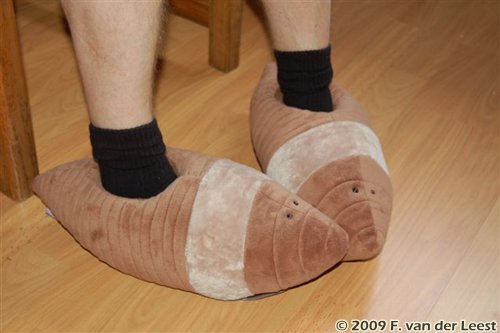 It is always a lot of fun connecting people worm folks from across the world – it really reminds me just how GLOBAL this little thing we like to call the ‘web’ truly is (they don’t call it the ‘world wide’ for nuthin)! I’ve received emails from vermicomposters – or those thinking about getting involved – living in South Africa, Australia, Romania, UK, Turkey, Israel, Jordan, India and Mexico (among others). Well, up until a little while ago I had still never received an email from anyone living in Norway (or any of the other Scandinavian countries for that matter), so it was a bit of a pleasant surprise when I received some vermi-questions from Felieke van der Leest. 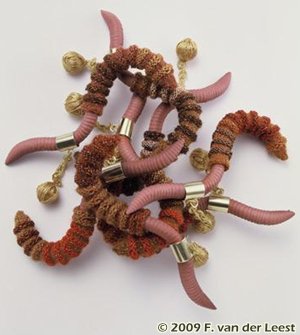 Technically speaking, Felieke is actually Dutch – she moved to Norway from The Netherlands last year.

…
Just an educational aside here – as Felieke explained to me, the name “Holland” is actually more for tourists, so if you want to seem a tad more cultured (haha) when visiting the country, you might want to use the other name.
…

I highly recommend you check out her website (her name above links to it) – you will see that she has created some pretty fascinating pieces of jewellery! One such piece, which for some reason I find strangely more intriguing than the rest (wink wink) is the one pictured to the right. These are brooches called “Jail Worms”, and rest assured that if I was a brooches kinda guy – I’d be all over these like a Red Worm on a cantaloupe!!
😉

By the way, here is a little blurb from Felieke’s bio:

Animals have a special place in Felieke van der Leest’s heart. She provides many animals with a busy social life as ornaments, gives a select group a nice home in museums and she placed a few oversized specimens in the center of everyone’s attention in meeting rooms and stairwells. Jewellery, object or light fixture, the scale or function is not the aspect that inspires Van der Leest: the telling of unusual stories is always her main motivation.

Van der Leest has enriched jewellery design with the introduction of textile techniques. Combining this with gold, silver and plastic, in ten years time she developed her own idiom. She drew from her childhood in Emmen where she would visit the local zoo and also from her metalsmith education in Schoonhoven. Her unbridled imagination later came to full bloom at the Rietveld Academy in Amsterdam. For someone who normally works with hand sized pieces it is remarkable to develop monumental installations. Nevertheless, Van der Leest has already produced some ‘jewels’ for public spaces, cooperating with her cousin in Neef Nicht Design.

Anyway – after I helped Felieke with her vermi-questions she sent me a picture of her boyfriend’s worm-adorned feet (first photo above) since she thought I might get a kick out of it (no pun intended). Of course, upon seeing such cool slippers, I did what I do best and begged her to let me share them with all of you!
😆

As the picture caption indicates, these marvelous creations were actually made by Esther Nijdam, who in the words of Felieke is “a very talented young Dutch designer” (also a former intern of Felieke’s). Please be sure to check out her website as well (find the link in the photo caption).

Unfortunately, neither of these cool worm gifts will likely be available from Amazon.com any time soon, but if you happen to be a worm person (or have one on your Christmas list) living in Europe, then you might want to support these talented artists by purchasing from them!

I just want to close by saying thanks again to Felieke for the interesting email exchange. If nothing else, perhaps this post will help to inspire some creative souls (those partial to vermicomposting) over here in North America to come up with some great gift ideas like these!
8)