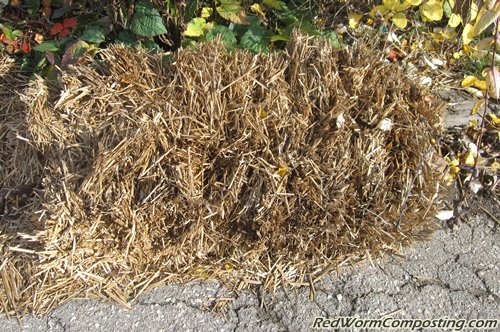 I’ve had a bale of straw sitting on the edge of my driveway since mid summer, and not too surprisingly it has started to rot. I guess it’s also not too surprising that it has become more appealing to my resident population of outdoor Red Worms as well. This actually caught me off guard initially – one day earlier in the fall I removed some of the straw to add to my big outdoor worm bin and found myself face to face with a lot more worms than I expected to see! The straw had a lot of fungal growth in the middle but what amazed me was how dry it was – definitely NOT optimal moisture conditions for the worms!

I’ve certainly found worms underneath my bales of straw before, but never so many right in the bale itself (well ok – there are loads of them in the walls of my ‘Winter Worm Bed‘, but that’s different). Makes me wonder what would happen if I actually put some of it in an enclosed worm bin and moistened it even more. Hmmmm… 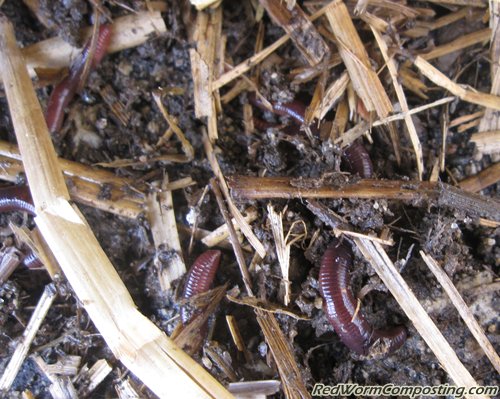 Straw is a fantastic worm composting material, but just like some of the other ‘fantastic’ materials – such as coffee grounds, fall leaves, and grass clippings – there seems to be a subtle art involved in terms of getting it to work on its own. Of course, straw mixed with manure works very well since the manure holds water much more readily and also adds plenty of nitrogen and microbes into the mix.

Anyway – all of this has reminded me that I wanted to do a ’50 Cocoon Challenge’ using straw. Obviously I can’t use this particular bale (haha), but I am hoping to get some new ones fairly soon!

On a related note, I also wanted to mention that I will be starting up my shredded cardboard ’50 Cocoon Challenge’ very soon as well. Both of these should be very interesting since no ‘regular’ food will be added.
Stay tuned!
8)