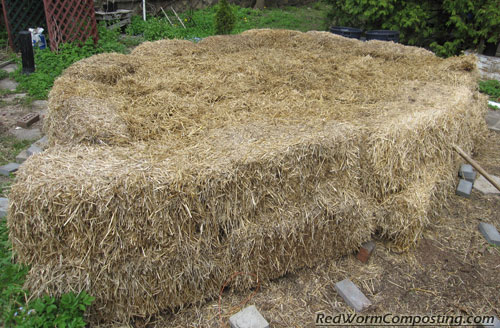 It feels pretty funny writing a ‘winter worm composting’ post here in mid-May (my last update having been written back in February), but then again, for me this sort of thing has kinda become ‘par for the course’. I’m still sticking with my ‘better late than never’ motto!
😆

As I wrote in various other posts, this year’s winter composting project was definitely a major success. Both of my previous attempts (with a much smaller system) had to be cut short due to temperatures dropping dangerously close to the freezing mark in February. This year, my system actually seemed to follow the opposite path – starting out relatively cold early in the winter, then gradually getting warmer and warmer. This worked out really well, since it ended up being nice and toasty in the bed during a time when it was extremely cold outside.

What’s interesting is that given my success on the winter composting front, I naturally assumed that this system would make an easy transition into a typical warm-weather worm bed, but the funny thing is that I’ve probably been having more trouble with it now than I did during the winter. My first mistake was leaving the tarp on for too long – this served to trap heat and reduce air flow.

Over-heating in general seems to be a major issue. Even though I haven’t really added all that much food material, there are sections of the bed that have become too hot for worms. My hope is that they’ve migrated downwards or to the sides where it is cooler. I’m sure there are loads of them taking up residence in the straw bales themselves.

Last summer I discovered the heating potential of coffee grounds, when the temperature in my backyard worm bin skyrocketed due to the addition of a relatively modest amount (I thought so anyway). As I’ve written previously, we have added a considerable quantity of coffee grounds to the big bed, so I suspect this has contributed to the problem. I assumed they would be totally fine spread out as thinly as they are, but you know what can happen when you ‘ASSuME’.
(heehaw)
😉

My hope is that the temperatures will start to stabilize, thus making this system an excellent worm growth bed. There’s no doubt that there are loads of worms in there, but it’s certainly not performing as well as it could. Interestingly enough, my smaller beds (like the vermicomposting trenches) seem to have higher worm densities.

Anyway, I will certainly keep everyone posted (although, perhaps in my usual belated manner – haha) on my progress with the bed.