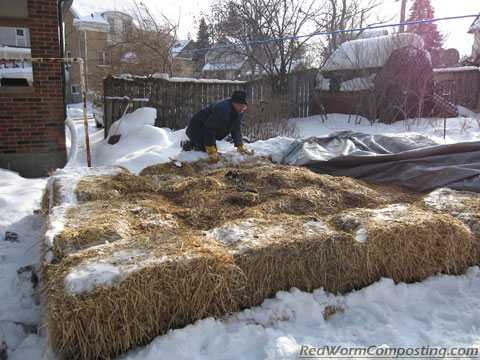 My dad surveys temperatures in the winter worm bed

I was able to get over to my dad’s place on Friday afternoon to see how things were coming along. It was my first visit since adding a large amount of manure (and more straw) to the system, and I was very eager to see if the bed had warmed up at all. As you may recall, the bed wasn’t doing too badly by the time I got around to adding the manure – temperatures in the middle of the pile were in the 15 C (59 F) range. 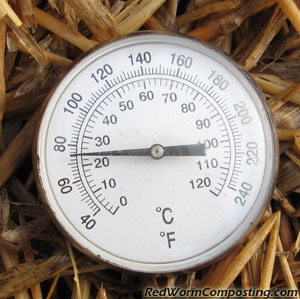 Temperatures have certainly climbed since then! I am very happy to report that throughout much of the bed temperatures are 20 C (68 F) or higher (see picture to right).

What impressed me even more than the maximum temperatures, was the fact that the warmth was so widespread. On one side, just in from the wall, there still seems to be a really cold zone (just over the freezing mark), but the rest of the bed is averaging 15 C (59 F) or higher. Surprisingly, I found some really warm zones only a couple inches in from the back wall!

Given the optimal vermicomposting temps in much of the bed, I was naturally curious to see what the worms were up to down below. I was pleasantly surprised to find lots of them up in the manure layer, just under the straw. 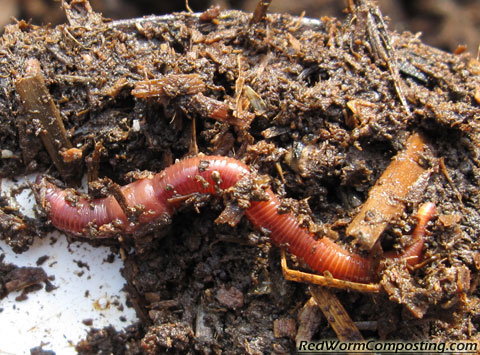 There seems to be a lot of young/small worms in the upper zone, but I did find some spots with a fair number of decent sized worms as well. This small worm dominance didn’t surprise me too much – in my experience, the larger worms often tend to concentrate themselves further down in a worm bed.

In other (good) news…

It looks like we (or more accurately, my technically-gifted brother) managed to get the weather station system – mentioned in my second winter worm compost post – working as a remote temperature probe! 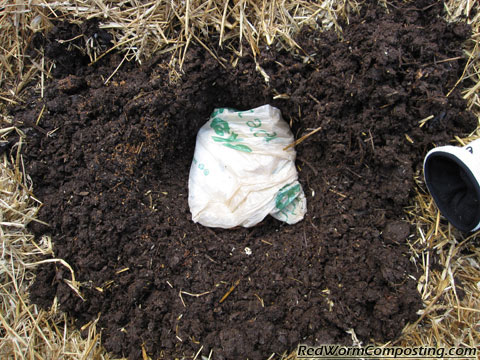 Remote Weather Station Sensor Gets Buried in the Pile

We buried the receiver in a zone that should provide us with a rough estimate of the average bed temp – that is to say, it’s not quite in the middle of the heap, and it isn’t buried very deep either. It started in the 14-15 C (57-59 F) range just after being buried, and according to my dad’s latest report it is now up in the 20 C (68 F) range.

We’ve clearly reached an interesting stage in our winter worm bed experiment. Believe it or not, the challenge will now involve trying to maintain ideal temps throughout much of the bed, without having any zones overheating too seriously. What’s really nice about this particular system, as compared to my previous (much smaller) winter composting bin, is that the worms should be able to move away from overheating zones quite easily.

Weather will likely play an important role on both sides of the coin (cooling/heating) from here on out. It was mild on the weekend, and this week we’re are supposed to have a couple days WELL above freezing – but I have little doubt that we still have plenty of winter weather ahead of us. It will definitely be interesting to see how significantly the temperature in the system changes over the next few weeks.

As it stands, I’d say this project has been a resounding success! Previously, this would have been right around the time that I was forced to give up on my winter worm bins, since temps were continuing to drop.
In this case, we really got off to a slow start (which in hindsight might have actually helped us), but things have been improving ever since. As it stands, it looks like there’s a very good chance I’ll be able to start harvesting worms from this bed before the end of the month!

Setting up a nightcrawler bin