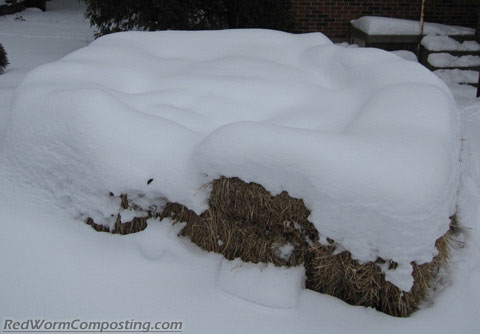 Winter worm bed looking more like a snow fort than a vermicomposting system!

I was finally able to get over to my dad’s yesterday for some winter worm composting work. The timing ended up being pretty good since it was a relatively mild day (in comparison to the really cold condtions during the past couple of weeks).

As you can see in the picture above, there was a nice thick layer of snow over top of the bed which I’m sure was an effective bit of extra insulation. Interestingly enough, as we started to dig the snow off we noticed that it was slushy down below and there was actually some water pooling on top of the tarp. I can assure you this was not due to the weather, since it hasn’t been above the freezing mark around here for quite some time. 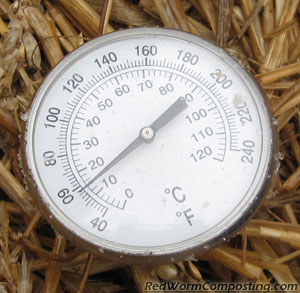 What this means of course, is that the heap has been generating its own warmth – definitely a good sign. Once the tarp was off, we went in for a closer look, with trusty compost thermometer in hand. In the middle, temps seemed to be in the 14-15 C (57-59F) range – not too shabby, especially considering how brutally cold it has been recently.

Temperatures closer to the outer walls weren’t nearly as warm, but these zones weren’t frozen solid either, so I’m not going to complain! My goal is of course to get everything warmed up, but part of the problem has been the fact that the system hasn’t been completely filled with materials – thus the straw bale insulation obviously isn’t helping in those zones. I think we remedied this situation for the most part yesterday, so it will be interesting to see where temps go from here.

Before adding manure to the bed, we added a lot of a material I refer to as ‘compost ecosystem’ – basically the compost-like material (containing countless baby worms and other creatures) left over after worms have been harvested from it. I had a lot of this taking up room in my basement, so I thought it would help to add it to the outdoor bed. It will add a lot more worms, plus it was a lot warmer than the ambient air temps so I should help to warm things up a bit as well. 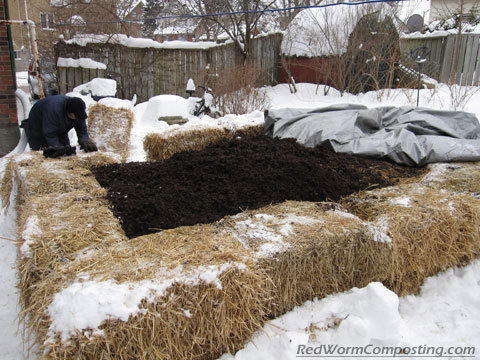 Winter worm bed after manure has been added.

I wasn’t too surprised to find manure sitting down in my dad’s basement was completely thawed out (you may recall me mentioning that it was taking a long time). It was nice to see that it was still in good shape though. It was a little bit sloppy and smelly down in the bottom of the barrels, but I’m sure the worms will be munching on it in no time, regardless (excess liquid will simply drain down into the bed).

I actually decided to take home three tubs of aged manure for my indoor systems, and also added a fair amount to some systems down in my dad’s basement, but there was still plenty left to add to the bed and we were able to get a nice mound of it built up in the middle. 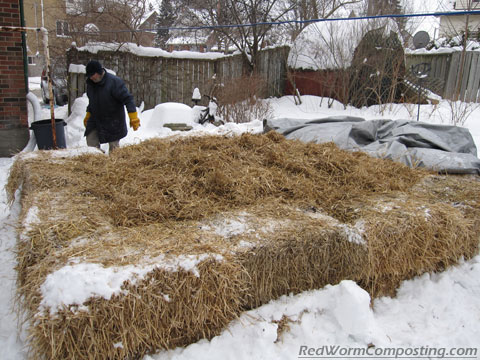 Once the manure was added, we broke open another bale of straw and spread it over top. This will provide some additional insulation, but will also help to maintain some air flow underneath the tarp.

I wasn’t sure if I wanted to add snow once the tarp was back on, since the black surface can help to absorb heat from the sun on sunny days. In the end I opted for the snow covered approach since it has been mostly overcast lately and it’s also supposed to get quite cold again this weekend.

The next couple of weeks should be interesting. As mentioned above, we have basically now filled the bed in completely, and there is now a substantial volume of nitrogen rich material in there. I have a feeling the bed will be quite a bit warmer by next week.

Worm Tea or not Worm Tea – That is the Question!

How Often Should I Spray My Worms?