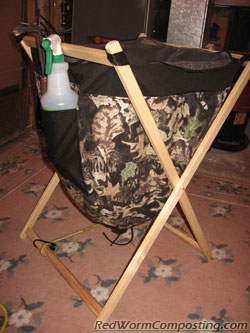 I am long overdue for a Worm Inn update!

I guess there really hasn’t been all that much in the way of exciting news to share with you. I still haven’t started harvesting vermicompost from my first system, and will likely wait for at least a little while longer before doing so. That being said, there are a couple things worth mentioning.

I’ve noticed something unusual in my Euro Inn – the worms have disappeared!
😆

Believe it nor not, this is actually quite interesting – and may be an indication that Euros aren’t the ideal worm species for a system like this. Of course, they haven’t really “disappeared” – they are simply hanging out lower in the system than the Reds in my other Inn.

ENCs tend to like going down deep where there is more moisture. The problem is that it will likely be more difficult to harvest castings from the bottom (without getting a bunch of worms) because of this. I’m certainly not ready to throw in the towel just yet, however. I’ll give the system a few more months before I draw any official conclusions.

Thanks to a tip from Worm Inn creator, Robyn Crispe, I am testing out a new (for me) way to deal with a minor fungus gnat invasion in my Red Worm Inn – coffee grounds!
What’s interesting is that one of my readers suggested this a long time ago (I even wrote about it in this fungus gnat post), but I totally forgot to try it out.

For the past week or so I have been adding all our coffee grounds to this system, rather than adding them to my food scrap hold as I would normally do. Luckily we brew up a pot each morning so it won’t take long to get a decent accumulation of the grounds in the Inn. It is hard to say for sure if the approach has been effective or not – there definitely seems to be few adults flying out now, but I’ll have to give it a bit more time. The worms seem to be loving it anyway! There are lots of them up in the zone where the grounds have been added.

If anyone else has fungus gnats, and also happens to be a coffee drinker, please give this a shot. I’d love to hear how this works out for you.

One important thing to mention though – MAKE SURE YOU HAVE FUNGUS GNATS, NOT FRUIT FLIES!
In my experience, fruit flies actually thrive in bins with a lot of coffee grounds, so you’ll want to be careful with this if you aren’t 100% sure of the difference between these two pests.

Fruit flies (FFs) and fungus gnats (FGs) are about the same size, but fruit flies have a thicker (chubbier? haha) look about them. FFs also tend to be lighter in colour (more of a brownish, rather than black), with larger coloured eyes – essentially looking like a mini house fly. FGs look more like mini mosquitos.

Anyway – I’ll be sure to keep you posted on the coffee grounds technique (and of course any other Worm Inn developments worthy of mention).
😎

How Many Worms Do I Need?