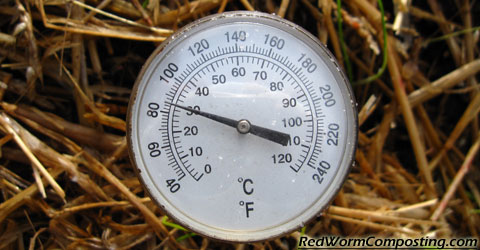 Nice and toasty warm in parts of the winter worms bed

Just a quick update on the winter worm composting front. I popped by my dad’s place on Friday to see how things were doing in the outdoor bed. He had been providing me with encouraging temperature updates (you may recall that we buried the sensor for the remote weather station in the bed last time), but I wanted to check temperatures throughout the bed.

I also wanted to add a considerable amount of food waste that had been piling up at home. I originally started stockpiling it so that I could make some ‘homemade manure‘, but the time involved (and the fact that my blender seems to have gone missing – I suspect foul play! haha) made me decide to simply take it over to my dad’s. Unfortunately I didn’t have enough time to add it to the pile on the day I took it over, so it was frozen when we added it on Friday. 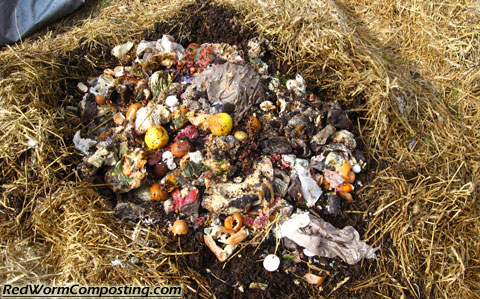 This actually makes things a little more interesting, since I’ll be really interested to see how/if it affects the overall bed temps, and how quickly it becomes worm food. One thing to point out – if you are wondering why there are plastic bags mixed in with the food waste, it is because these are made with biodegradable plastic.

Temperatures in the worm bed seem to be even higher than when I last checked, but certainly aren’t off the charts (always a good thing). The lowest temperatures I found were in the 10 C (50 F) range, while the highest was about 30 C (86 F).

Lots of worms seem to be really active up near the surface – I actually ended up feeling badly about the fact that I was digging around at all (to look for worms, and to create a bit of a depression for the food waste), since it was brutally cold outside at the time. My dad and I were more than happy to quickly pack it in and head inside after the food waste was added!

I will more than likely head over this Friday to see how things are looking.
Stay tuned!
8)