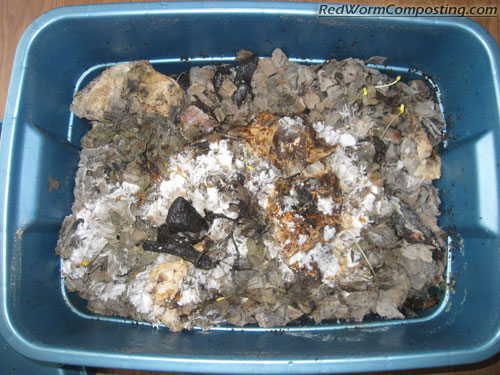 I’ve come to realize that one of the serious limitations of my worm bin set-up videos is that I don’t talk at all about the so-called ‘aging period’ I recommend. I actually recently made a video about this (part of an upcoming video series), but wanted to write a post about it as well.

Back in early April I set up a fairly large worm bin (also for a video), using my standard recommended methods. In fine Bentley Christie fashion I then proceeded to basically forget about it for a month!
😆

This is exactly WHY I have a fair amount of confidence in my recommendations. When it comes down to it, I’m basically a bumbling fool (and I mean that in the nicest possible way – haha), so if I can successfully vermicompost – pretty well ANYONE can!

Keeping things simple and sticking with the fundamentals is always the key.

When I opened the bin after letting it sit for a month, I wasn’t surprised to see that a lot of decomposition had occurred, and that fungi seemed to have taken over the system. There was even a good population of some sort of flying insect (a variety of gnats or flies). I definitely had a good chuckle about all of this, since people seem to consider me some sort of vermicomposting ‘expert’. In actuality, I’m just an ordinary guy who is very passionate about the topic, and has made (and is still making) every mistake in the book – thus providing people with plenty of lessons in what NOT to do!
😉

All joking aside, I was actually really excited to have this opportunity to provide readers with more info about this aging process, because it’s really not something I’ve talked all that much about. 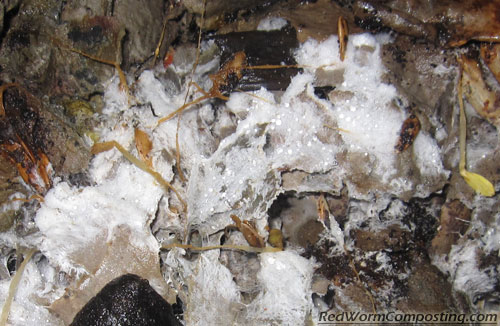 Aside from all the fungi and flies, I also happened to notice that the sides and lid of the bin were absolutely coated with a very small species of mite. I’m pretty sure this is the same variety that I’ve written about as a potential ‘indicator species’, after countless numbers of them left one of my Euro bins that went ‘sour’, creating heaps of dried mite carcasses on the outside of the lid and on the floor beside the bin. 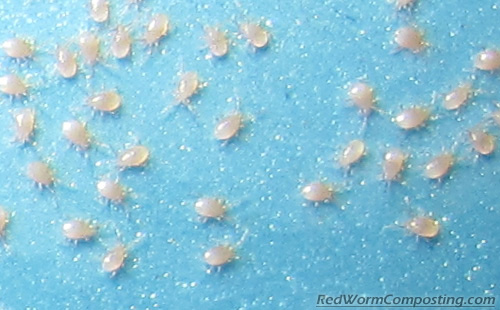 I’m sure what I’ve described thus far will sound very familiar for many of you who have used my methods for setting up a worm bin. Even after only a week (my usual recommended aging period) you can see pretty extensive fungal growth, and even some of these other critters who are taking advantage of the low-competition environment.

The big question of course, is what (if anything) needs to be done before adding the worms.

What I generally like to do (when not being a total procrastinator) is open the bin a few times during the aging period to check on the status of the contents. I will almost always mix everything up to break up the fungal hyphae and help to create a homogeneous environment. I will also add more bedding and water as needed – the contents tend to settle down quite a bit, so it can always use more bedding (this will help to improve the quality of the worm habitat). Even though I add lots of water-rich foods when setting up the bin, I almost always will be adding more water before the worms arrive. I want it to be as wet as possible without excessive pooling in the bottom.

This is fairly straight-forward stuff, I realize – but it can often be these subtle details I forget to elaborate on that can leave people unsure about the methodology.

As for this very well-aged system of mine, still sitting there without worms I might add, I’m not 100% sure what I want to do with it. I was thinking of setting up a ‘4 Euro Experiment’, or just adding worm cocoons to it to see how long it takes them to reach maturity. So many possibilities for fun experiments!
🙂

If you have any ideas, feel free to add a comment!