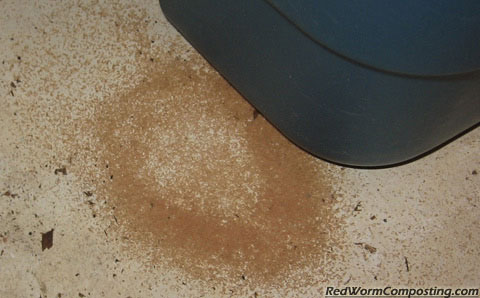 Heaps of dead mite bodies on the floor beside the bin 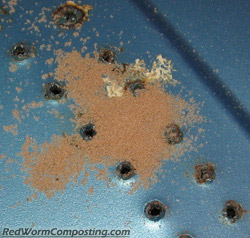 Well, it seems my recent attempts at getting my European Nightcrawler bin back on track are failing miserably thus far. When I looked down at the bin yesterday I was shocked to see a LOT of strange sawdust-like powder accumulated on the outer surface of the lid (near the air holes) and in various heaps on the floor around the bin. I can honestly say that I’ve never witnessed anything like this before!

Upon closer examination using my trusty Eyeclops hand magnifier, I realized that the dust was made up of countless tiny mite carcasses. These particular mites are much smaller than the round shiny ones I’ve written about before (which by the way seem to be doing just fine in this bin), so I don’t think I’ve ever really realized they were there. Given the amount of dust that has accumulated outside the bin, I’d wager to say that they were hugely abundant in the bin.
I actually found some living specimens of the same species huddled up in a writhing mass on the underside of the lid, but I suspect they won’t last much longer.

Interestingly enough, the worms seem to be ok for the most part. I saw one sluggish worm up on the surface yesterday, but it buried down into the material once the lid was off. With each passing day I am more and more impressed with these Euros. There’s no doubt in my mind that Red Worms would have been trying to get out of this bin by now and at least some would have perished I’m sure.

I think it’s safe to say that there is nothing I can do to help mitigate the situation in the bin – it’s definitely time for an overhaul. This may sound odd (given my desire to keep a pure culture of Euros) but I’ve decided to dump the bin in my big outdoor worm bin. I want to see how well the Euros do in that bin and whether or not they can compete with the Reds. I have one other small Euro bin going at the moment, and know that I will easily be able to separate out some adults once they are in the big bin (they look quite a bit different from the Red Worms) for future Euro-only systems as well. This way I can also see what’s going on down below in the sour bin – hopefully it won’t be too ugly!
😯

I’ll definitely take some pictures and write about it here shortly!