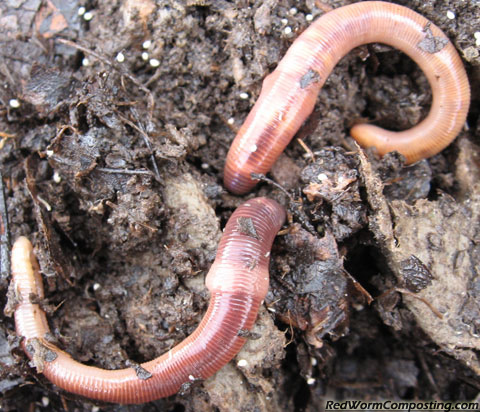 As soon as I finished writing my last post, I decided enough was enough – it was time to rescue my Euros from the horrible conditions clearly present in their bin (as indicated by the mounds of mite cadavers piled up on the floor close by). So I grabbed the bin and headed out to my big outdoor vermicomposting system – one that has up till now only been occupied by Red Worms.

I wasn’t sure what sort of gruesome mess I might find down in the bottom of the sour bin, but I knew there were at least a few Euros still alive (I found some yesterday when digging around).

As it turns out, the entire lower half of the bin was pretty much fine – a tad anaerobic perhaps, but certainly not the toxic nightmare I was half-expecting. I found countless healthy looking worms, along with plenty of juveniles as well, so that certainly has me breathing a sigh of relief! In all honesty, I could have easily just scooped the materials (and worms) from the lower half back into the worm bin and continued on my merry way with that system. Little did I realize it was only the materials in the top half of the bin that were in really bad shape.

No problemo though – I am really interested to see how they fare in the big outdoor bin.
As per usual, I will keep everyone posted!
8)