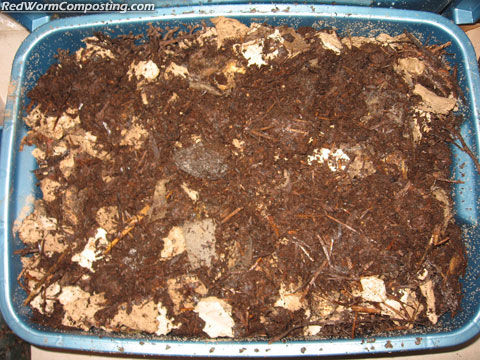 Just thought I would provide a bit of an update on my sour worm bin situation.
As I said in the other ‘sour bin’ post, I’ve decided to take matters into my own hands to see if I can get this bin back in good shape.

The first thing I did (earlier in the week) was shred up a considerable amount of cardboard – the variety I refer to as “egg carton cardboard” – and added it to the upper layers of the bin. In this case it was actually shipping cardboard (keeps products stable inside shipping boxes), but it is essentially the same stuff. I really like it because it absorbs water very readily and also seems to break down much more quickly that corrugated or other types of cardboard.

The rationale for adding this material is that I want to absorb a lot of moisture in the upper region of the bin and also help to aerate this area as well, not to mention providing a more worm-friendly zone of material (once it is moist enough for the worms to move into).

Originally I was thinking about adding some brown leaves to the bin, but as it turns out, my leaves are very dry and likely wouldn’t help much at all. What I was hoping for were moist, partially decomposed leaves that could introduce lots of beneficial aerobic microbes and again contribute to the ‘worm friendly’ habitat I’m hoping to create. 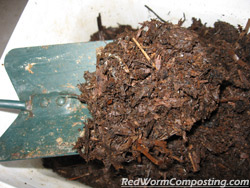 I’ve opted instead to use some well-aged horse manure (that was originally bedded with straw and saw dust). My dad managed to secure a large quantity of this material, some of it absolutely jammed full of red worms I might add (something I’m going to talk about in another post). The particular bag of material I used (for my sour bin) is very well aged and doesn’t have any worms or cocoons (that I could see). I’m hoping I don’t end up instroducing Red Worms into my Euro bin, but it is a chance I’m willing to take – it certainly won’t be the end of the world.

It is interesting to see the difference between the material containing loads of worms and the stuff that contains none. Both are clearly well-aged, but the material with worms in it has lots of chunks of still semi-recognizable manure. The other material almost just looks like finished compost (although there is still a lot of straw/sawdust residue). Both materials have a nice earthy odour (not a manure smell), but the wormy batch is definitely somewhat stronger.

Both of these materials would make an excellent starter bedding for a new worm bin, since they are quite well stabilized, but still should have some food value as well (especially the stuff that is already full of worms, obviously).

Like rotting leaves, aged manure will help to introduce lots of beneficial aerobic microbes to my Euro bin and will offer a bit of a safe haven for the worms. Hopefully it will help to shift the balance towards a more worm-friendly environment.

Anyway, I’ll let you know how things turn out!