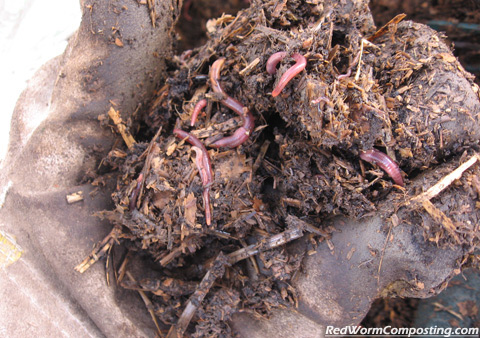 As I mentioned in my last post, my dad recently obtained a large quantity of aged horse manure for me (a close friend of his is an avid rider). It was actually the lady at the horse boarding stable who collected the material. My dad – knowing how much of a Red Worm fanatic I am – had casually asked her if she ever saw any worms in the manure piles. She said that she had in fact seen lots of them, and when she learned about my interest in them, offered to collect some of the material for us!

My very first encounter with Red Worms actually occurred when I dug into a huge aged horse manure pile while working at a stable one summer (when 14 or 15 years old). I was told that I was welcome to take as much of the manure as I wanted back home for my dad’s garden. When I dug in and lifted the first pitchfork load of manure I couldn’t believe my eyes – it was absolutely LOADED with odd looking (to me at the time) reddish striped worms. Being an avid fisherman, I was much more familiar with the larger, brown Dew Worms (Lumbricus terrestris), or the other brown/gray worms found in my garden soil, but finding so many worms in one place – and not even in soil at all – certainly shocked me. My shock however quickly turned to excitement – I had visions of starting up my own little bait business in my dad’s backyard, and decided to gather as many of the worms as I could.

Once back at home, I at least had the sense to add the worms to my dad’s compost heap, but unfortunately it was very dry and consisted primarily of old grass clippings and woody debris. You can probably just imagine my disappointment when I returned the next day and found NO worms left in the area! My bubble was burst, and the dreams of my bait empire crushed – so I decided to give up on Red Worms – at least for a decade or so.
😉

My main point here is that aged manure piles can be a major (and usually overlooked) gold mine in terms of getting yourself a supply Red Worms. Many farmers, stable owners etc pile manure outside for extended periods of time and don’t have the slightest care about any worms that might end up living in the material. Often, the material ends up spread on fields or gardens, but if you ask nicely and explain your interest, I’m sure most people wouldn’t hesitate to let you poke around in their manure heaps and even take some buckets of manure home with you.

Not all manure piles will contain composting worms – only those that have had them introduced, since these worms don’t live in regular soil (like the typical ‘garden variety’). All it would take is one or two cocoons stuck to the bottom of a birds foot. Aged manure heaps represent pretty well the best habitat for Red Worms, so the population in the heap would likely increase very rapidly (at a rate that would put my ‘4 Worm Experiment’ to shame, thats for sure – haha!).

So what am I going to do with my new worms and aged manure, you might ask?

Well, this morning I added a lot of material (with worms) to both of my outdoor compost bins to help boost worm populations in those systems. I’ve also used some of the no-worm material in my ‘sour worm bin’ (as mentioned), and have added it to some of my other indoor bins as well.

I’m also likely going to start up at least a couple new vermicomposting systems inside! Should be fun.
8)