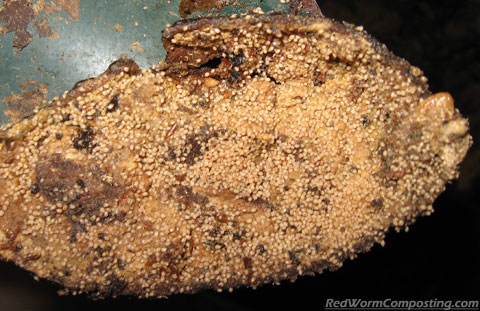 Half an avocado absolutely coated with white mites

Well, it seems my experiment with adding bokashi to an indoor worm bin has ended up having semi-negative repercussions. I just HAD to add that second helping, didn’t I?
😆

For some reason, seeing that the worms were finally moving into the material inspired me to push my luck by adding even more. Unfortunately, that ended up causing what people commonly refer to as a ‘sour’ worm bin. Truth be told, I am actually quite happy about it, since it provides me with the opportunity to experiment with getting things back on track in the bin, and should be a valuable opportunity for learning (both for me, and for those reading the blog).

So how do I know that all is not well?

One obvious indication is the unpleasant odour that greets my nose when I open the bin. I’m not sure how to describe it – it’s not the typical smell of rotten food waste, and it’s certainly not the nice earthy smell of a properly balanced bin. It’s more like the smell of badly spoiled milk, and makes me understand why people refer to it as ‘sour’.

I’ve also noticed a massive increase in the populations of white mites and white worms. The mites are coating everything. As I’ve written before, the mites themselves are not ‘bad’ or ‘harmful’ – but when a population explosion occurs it typically is an indication of a pretty major shift in the balance of the bin. Generally it occurs when excess food has been added and when conditions become more acidic (the two often go hand in hand). Large amounts of food clumped together can easily go anaerobic, producing acids and alcohols (among other things).

Just the amount of waste I added (too much!!) was bad enough – but what made it worse was the fact that the material was already anaerobic since it had been fermenting in the bokashi bucket. As mentioned, everything was totally fine after the first addition of bokashi scraps. After a few days I could smell that aerobic conditions were getting re-established, and the worms were readily feeding on the materials. At that point, I should have simply let them continue processing that material for awhile before adding any more!

Interestingly enough, I added a LOT of bokashi waste (probably 4 times as much) to my outdoor composter a little while ago and it was full of worms very quickly! Certainly an indication that the size of your system can have a major impact on its ability to handle various waste materials.

One other indication that something was ‘off’ in my indoor bin was the behaviour of the worms themselves. Like I said, they had moved up into the first layer of bokashi waste and seemed to be actively feeding on it. Once I added more however, they were suddenly nowhere to be found. Digging down I can find them below, but they definitely seem to be avoiding the upper layers of the bin!

I must say I’m pretty impressed with the tolerance of these European Nightcrawlers though! I suspect if this had been a Red Worm bin, I might have at least a few dead worms (or worms attempting to escape) on my hands.

As far as trying to rectify the situation goes, I’m definitely not going to doing anything drastic, like add lime or anything like that. I want to gradually shift conditions in a positive direction, not throw things completely off-kilter! I think the addition of a thick layer of fall leaves, shredded cardboard and ground up egg shells will be a good start.

I’ll be sure to keep you posted on my progress!
8)