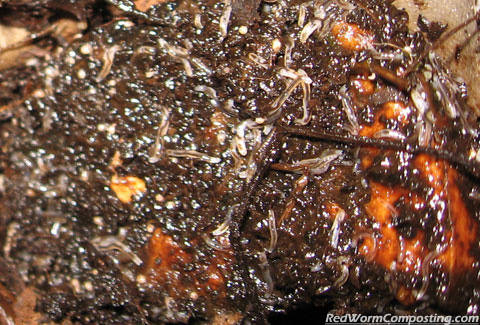 Well, it seems the slow population growth of my ‘4 worm experiment‘ bin worms has left the door wide open for other compost organisms. When I opened the bin up last week for a watering I noticed a fair number of small maggots on some of the rotting waste materials. Digging around some more I realized that the entire bin was LOADED with them – they were everywhere! I wasn’t 100% sure what they were, but suspected they were a variety of fungus gnat. 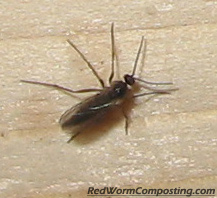 Something that suddenly dawned on me was the fact that house would likely be crawling with adults within a couple of days! Sure enough – when I checked back a day or two later, the bin was absolutely covered with gnats, both outside and in – and there were quite a few buzzing around my basement office (where the bin is kept) as well.

On the bright side, I DID also happen to notice that there were quite a few young worms in the bin, so hopefully within the next couple months I’ll finally have a normal vermicomposting system! I’m really interested to see what sort of vermicompost I can make with it (since it is a stackable bin).