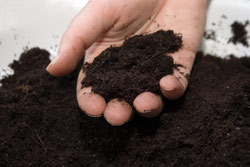 I tend to use the terms ‘worm castings’ and ‘vermicompost’ interchangeably here on the site, when technically speaking they are not quite the same thing.

Worm castings are literally little worm turds (for lack of a better word – haha) – that is to say, material that has gone in one end of the worm and out the other. If you have 100% pure worm castings (virtually impossible to achieve) you should have a material that looks a lot like coffee grounds.

Vermicompost is really a more accurate term when it comes to the material produced in most worm composting systems. It is basically a mixture of worm castings, partially composted wastes, and any resistant materials that won’t readily break down. Really high quality vermicompost should have a high percentage of worm castings in it, but the chances of having every last bit of material in your system pass through a worm at least once is pretty slim.

I’ve talked previously about the awesome vermicompost produced by Worm Power. Although I referred to it as ‘worm castings’, it isn’t 100% pure castings, but there is definitely a very high percentage. If I remember correctly, they actually let the material pass through the flow-through system twice in order to ensure that it is as close to pure castings as possible!

The problem is that there are no standards in place to dictate what percentage of worm castings has to be present in order for a product to be “100% pure” – nor are there really any ways to accurately measure the castings percentage. It really just comes down to the look and feel of the material, the reputation of the company producing it, and of course its ability to boost plant growth.

Anyway – definitely not trying to split hairs here – just thought some of you might be curious about the technical difference between these two terms!
8)