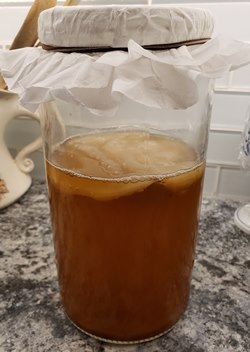 Last month, while involved in a “dry October” challenge, my wife and I discovered another interesting beverage – kombucha (pronounced “kum-boocha”, according to Google).

We both loved it, and the fact that it had low – or in some cases NO – sugar, and even some potential health benefits certainly didn’t hurt either.

Of course, me being me, I couldn’t just leave it at that. I had to go into full on “geek” mode – learning everything I could about it, including how to brew our own.

And my dad – being the kinda guy he is – of course showed up one day with a starter culture, not long after he caught wind of the fact that I was planning to try making it!

As a “worm-head” it was also only a matter of time before I started thinking about bi-products of the process that could potentially serve as worm food. Right off the bat, it was the “SCOBY” (Symbiotic Culture of Bacteria and Yeast) that seemed to offer the most promise. What’s interesting is that a surprising number of beginner resources suggest that the SCOBY is the white globular mass that forms on top of the tea during the brewing process – and that it is this mass you then need to use to start up more batches later on.

As I dove further, into various online kombucha groups and resources, however, it became increasingly apparent that the glob – many prefer to call the “pellicle” or “SCOBY mat” is just a bi-product of the microbial activity in the brew. It is the liquid portion of a strong brew that in fact serves as the best starter!

Naturally, this got me even more excited since it meant I would likely end up with a lot more of these pellicles that could be put to other uses (wink wink). As a related sidenote, I should point out that some people actually eat the SCOBY mats (eg. I’ve come across some interesting “fruit roll-up” recipes), while others just toss them in a regular compost pile. And I suppose some people just toss them in the garbage (which is a shame).

The good news is that my first batch of (green tea) kombucha has made it far enough along in the “F1” (first fermentation) phase to: A) be ready for F2/F3 – where people typically add flavoring (I am trying cherries and blueberries) and bottle up to get some carbonation, and B) grow some SCOBY mats I can now test out as worm food!

It is important to note that kombucha is really acidic, so I don’t recommend simply tossing pellicles straight from your jars into your worm bins. I am soaking mine in some water before use. 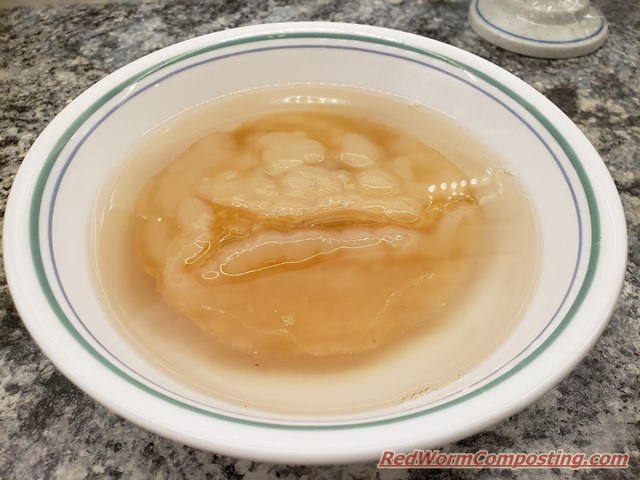 Once my flavoring stage is finished, I will also screen out a lot of the fruit leftovers and bigger yeasty bits – so all that should end up in a worm bin as well (will soak in water first, just like the mat).

I’ve really enjoyed diving in with kombucha homebrewing so far. It has been ages since I’ve been this focused on something new yet also this much of a “newbie”, so it has provided an interesting perspective! I’m reminded of what it can be like when people are brand new to vermicomposting as well (takes me back to those “good ol’ days” of my own wormy-journey).

>> There is a LOT of information out there – including a LOT of not-so-great advice being shared pretty widely. So it’s important to drill down and really see who the experts are and what resources are the best ones to learn from.

>> It is far more important to get started – even before you feel “ready” – than to get bogged down with “analysis paralysis”. There have been a number of times already where I haven’t been able to find the exact answer I was looking for, and simply had to follow my gut (a funny phrase when talking about kombucha, I’ll admit – haha) based on what I had learned.

And also similar to vermicomposting…

>> It’s becoming clear that over time most peopel develop their own nuanced approach – something that works best for their preferences and overall situation. There is no one “perfect” way to do things – it is the guiding principles that are far more important than the exact step-by-step instructions (although I will admit that some of these can be super helpful early on).

It would be great to hear from other “booch-heads” (not sure if that is a real term but I’m running with it – lol), especially those with an interest in vermicomposting as well. Be sure to drop your comments below!
😎