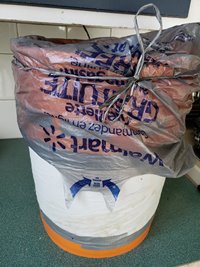 Over the next 6 months or so I was very impressed with how well these breathable buckets worked as worm bins – especially in comparison to other bucket bins I’ve tried in the past! I now regularly recommend them to anyone looking for a super simple, space-saving (not to mention inexpensive) way to get the ball rolling with worm composting.

Somewhere along the way, I decided to try a modified approach. Instead of installing the cap vents I just used big drill holes with old sheet fabric secured tightly over top. I made a couple of these bins, and did get one system set up – but didn’t end up testing it out quite as actively as I had hoped…

One source of motivation at the moment is a mounting pesky-fly situation developing due to all the new systems I’ve been setting up recently. A perk of these bucket systems – not mentioned earlier – is that they can be really good at keeping pests out, or in (if you introduce them accidentally). So it will be really interesting to see if this system stays fly-free over time.

I want to point out that these buckets are quite a bit more breathable than the ones with the bottle cap vents, simply due to the sheer number of holes. So, I will definitely need to keep an eye on moisture levels.

As you can see in the smaller image above, one way I am compensating is by using an oh-so-stylish plastic bag cover instead of a piece of fabric. While we’re on the topic, it’s worth noting that I opted for synthetic twine instead of elastics (which tend to wear out relatively quickly) to secure it. 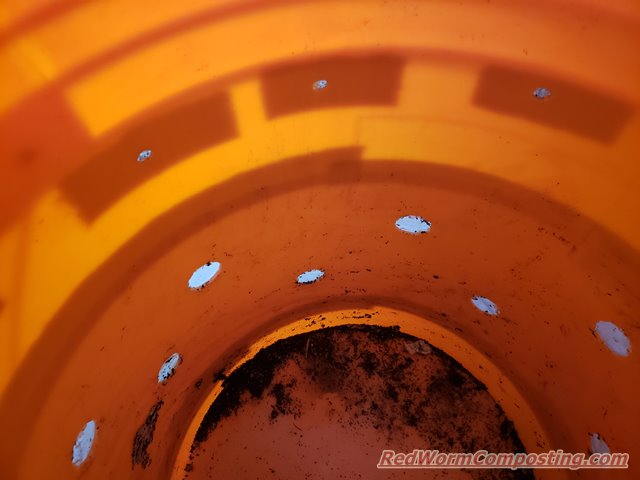 Phase one of this project will simply be bin prep (worms will get added later).

I started with a decent layer of bulky shredded corrugated cardboard down in the bottom. 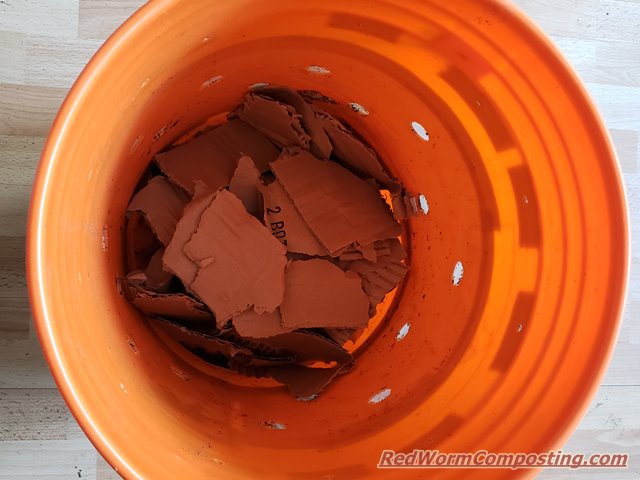 Next I added a mulched leaves and grass clippings mix I happened to have. 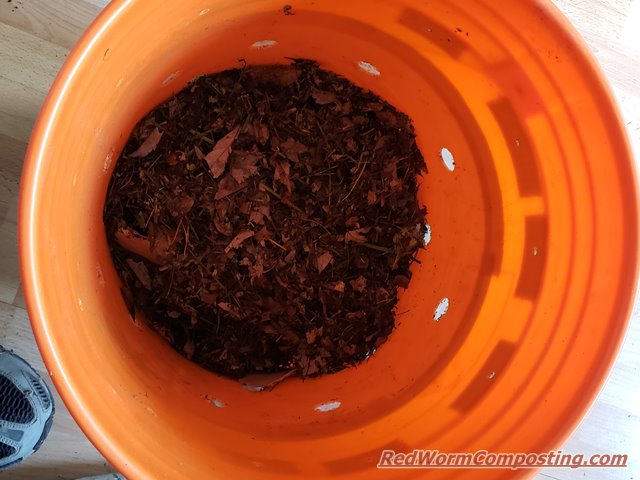 These layers were then repeated… 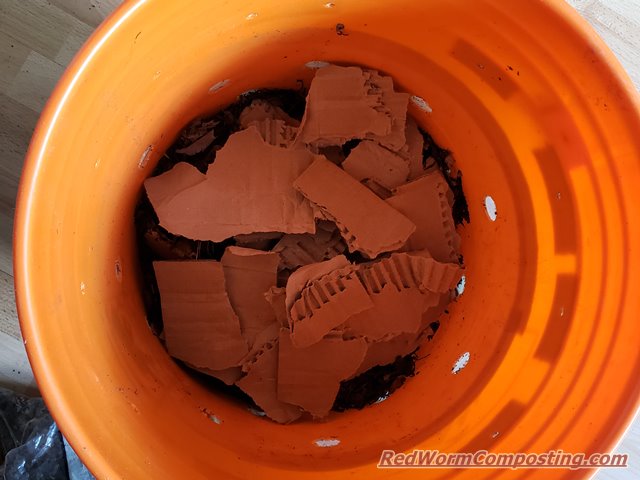 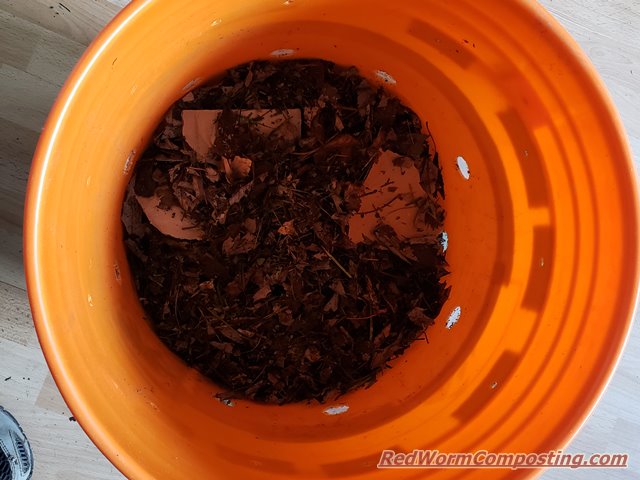 …before tossing in a bunch of cat hair that had been waiting for a vermi-“home”! I figure this system might be a better choice for the hair than one of my bag systems since it will hopefully have better moisture retention (although I could be wrong about that). 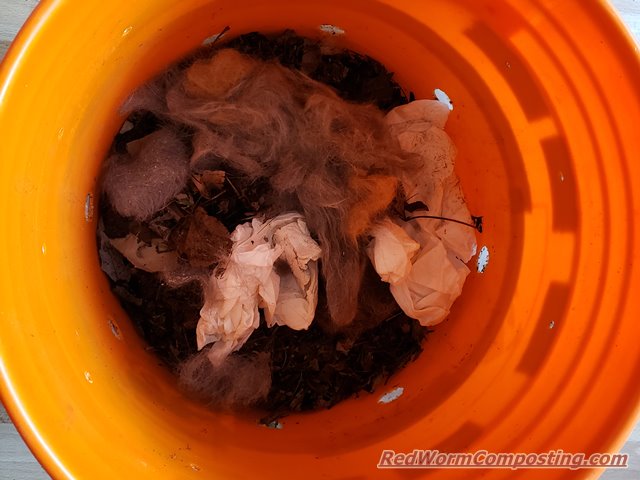 I then moistened everything with some water and added one last (for now) layer of shredded cardboard. 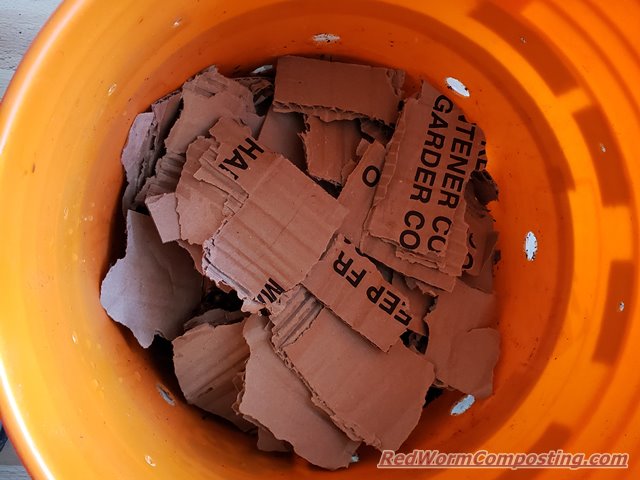 Today I added some frozen fruit scraps to ramp things up a bit, since I won’t likely be back here (to my Dad’s place where most of the worm action is happening) for another 5 or 6 days. 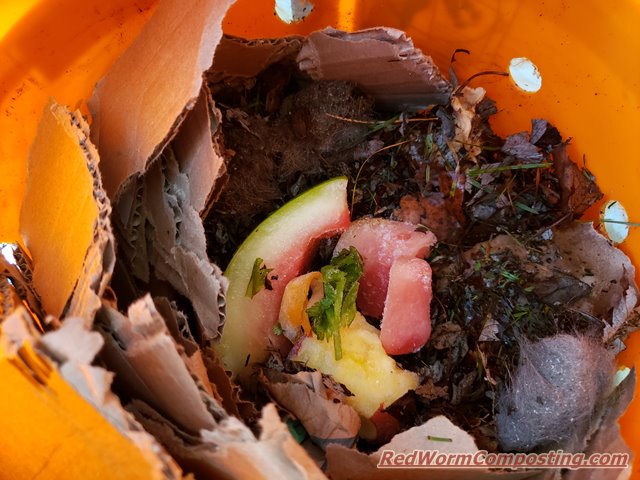 As for the worms – I will likely start adding some next week. It will be important not to introduce any flies or larvae, so it may end up being a painstaking process cleaning them before adding them.

On a semi-related front, I will be testing out a new fly trap I made with a ziploc bag and some fruit scraps. The idea will be to lure in as many “breeders” in as I can and then periodically toss the bag in the freezer overnight. 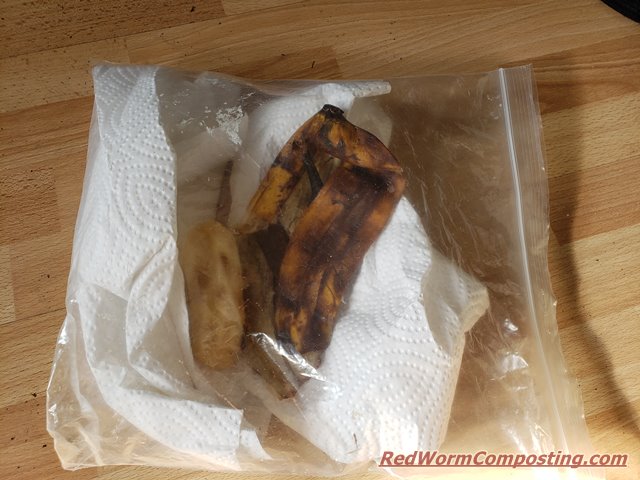 I did something similar with pop bottles for one of my earliest scuttle fly invasions, some years ago now, and it seemed to work very well. With a fleet of these things in use – getting rotated in and out of the freezer – I think I can get the fly situation under control relatively easily.

I will write more about that topic in another post fairly soon – and will keep everyone posted on the bucket bin front as well.
Stay tuned!
😎

P.S. Just in the short time since setting up my new trap quite a few flies have already found their way in. Can only imagine how it will look in 5 days!